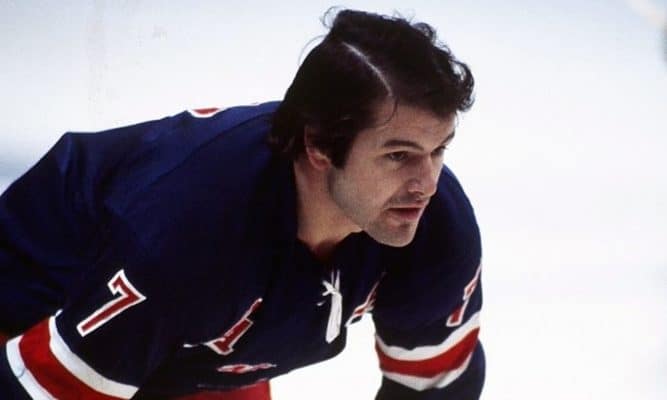 Rod Gilbert, also known as Mr. Ranger was a Canadian professional ice hockey player. He is best known for playing in the National Hockey League (NHL) for the New York Rangers. Gilbert was the first hockey player in the history of the New York Rangers to have his number retired. He died at 80 years of age on August 22, 2021. Rob Gilbert net worth at the time of his date is estimated to be around $1.5 million.

Rod Gilbert was born on the 1st of July, 1941 in Montreal, Quebec, Canada. Nothing is much known about his parents, and past life. However, he seems to be interested in hockey since he was a kid. He grew up as a fan of the professional ice hockey team, Montreal Canadiens.

In 1960, he was playing junior hockey for the ice hockey team, Guelph Biltmore Mad Hatters of Ontario Hockey Association (OHA). However, he went through a serious accident at that time, which broke a vertebra in his back. The incident also temporarily paralyzed him. After going on surgery, he had a hemorrhaging in his leg. Later, Gilbert recovered successfully from the injury and got back to his game.

Gilbert started playing in the 1960-61 NHL Season after he finished his junior career with the ice hockey team, Guelph Royals. He was playing for the New York Rangers in the season. In a short time, he became popular among Rangers’ fans, and he started getting recognized as an NHL star. In 1965, he went through surgery after suffering from a second spinal fusion operation.

Gilbert remained out of the games for half a season. He made a comeback in 1966-67 and scored 28 goals. In 1976, he received the Bill Masterton Trophy for his persistence over his back troubles. Gilbert and New York Ranger’s General Manager, John Ferguson had a contract dispute in the 1977-78 NHL season.

On October 14, 1979, his number 7 was retired by the New York Rangers. It became the first number ever to get retired by the team. After retirement, he started his own restaurant named Gilbert’s on Third Avenue in Manhattan. Gilbert had bought his first restaurant in 1969.

Rod Gilbert was married to a lady named, Judith Christy. Their wedding ceremony was conducted by the New York mayor, David Dinkins in 1991. He has four kids with his wife, Judith, named; Chantal, Holly, Justin, and Brooke. He also has seven grandchildren.

Gilbert was confirmed dead by the National Hockey League in a press release on August 22, 2021. However, the real cause of his death has got revealed yet. Gilbert was one of the ten athletes who got featured in Andy Warhol’s 1979 Athlete Series of paintings. He was featured along with prominent sports figures from the 1970s like Chris Evert, O. J. Simpson, and Pele.

Rod Gilbert had a net worth of around $1.5 million before he died on August 22, 2021. He has earned the big amount most probably from his professional ice hockey career. In addition to that, his restaurant business has also helped him to gather such a hefty sum.

Herschel Walker Net Worth: How Rich is the Retired NFL Player?

Yordenis Ugas Net Worth: How Rich is the Boxer Actually in 2022?