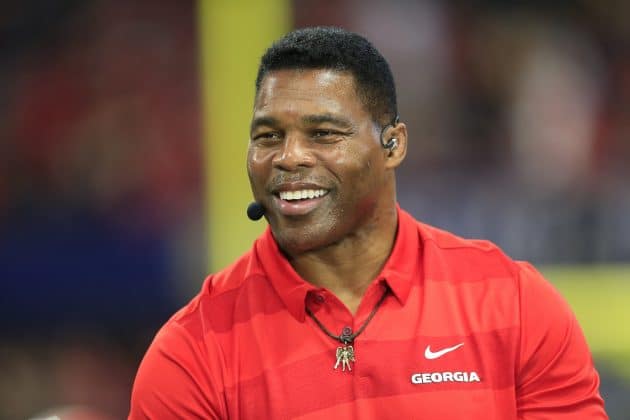 Herschel Walker is a retired American football player. Walker played for the Dallas Cowboys, Minnesota Vikings, Philadelphia Eagles, as well as the New York Giants during his career.  As of 2022, Herschel Walker net worth is estimated to be around $12 million.

Walker was a star in college football for the University of Georgia having been ranked as the No. 1 player by the Bleacher Report and later on being part of the College Football Hall of Fame in 1999.

Walker grew up in a hardworking blue-collar family alongside his six other siblings. As a child, Walker was overweight and had the problem of stuttering. However, his mother motivated him to not look at such problems as excuses and rather face them.

He studied at Johnson County High School where he played different sports along with football such as basketball and track. He helped the school’s team called the Johnson County Trojans to win their first state championship.

In the year 1986, Walker signed with the Dallas Cowboys where he was to play in the position of fullback. He had a five-year contract worth $5 million with the Cowboys and grew immensely as a player over the years.

You May Also Like:   Trevor Bauer Net Worth: How Rich is the Baseball Pitcher Actually?

Within three years, Walker decided to join the Minnesota Vikings with the Vikings offering to trade five players, as well as six future drafts, picks to lure Walker to their team. This was a great deal for the Cowboys as well since they would be getting so many talents if Walker was traded.

That is exactly what happened with Dallas Cowboys having great success with the talents from the trade. Walker would play for them for a couple of years and then played for the Philadelphia Eagles.

He would later sign with the New York Giants for a three-year deal that was valued at $4.8 million. However, he didn’t have a lot of success with the Giants because of a lack of alignment in the roles that he was given.

Other than his professional career, in his later years, Walker started to be politically active with him identifying as a Republican.  He expressed his support for the Secretary of State Brian Kemp as well as President Donald Trump who would even appoint him to be the co-chair on the Council on Sports, Fitness, and Nutrition..

Walker married Cindy DeAngelis Grossman who he fell in love with in college in 1983. Together with Cindy, the couple had a son named Christian. However, after close to two decades together, they divorced in 2002. He then started a relationship with Julie Blanchard who he would later marry.

Walker is known for his unique training styles with mentioning that he gets only five hours of sleep and eats only once a day. He doesn’t lift weights either and rather does more than 1000 pushups and around 2000 sit-ups every day.

You May Also Like:   Keith Appling Net Worth: How Rich is Retired Basketball Player?

As of 2022, Herschel Walker has an estimated net worth of $12 million. Along with the immense success he has had playing football professionally, Walker has also been involved in several business ventures such as Renaissance Man Food Services, Renaissance Drapery Manufacturing, and H. Walker Enterprises, LLC.

Jimmy Hayes Net Worth: How Rich was the Ice Hockey Player?

Rod Gilbert Net Worth: How Rich was the Hockey Legend Actually?