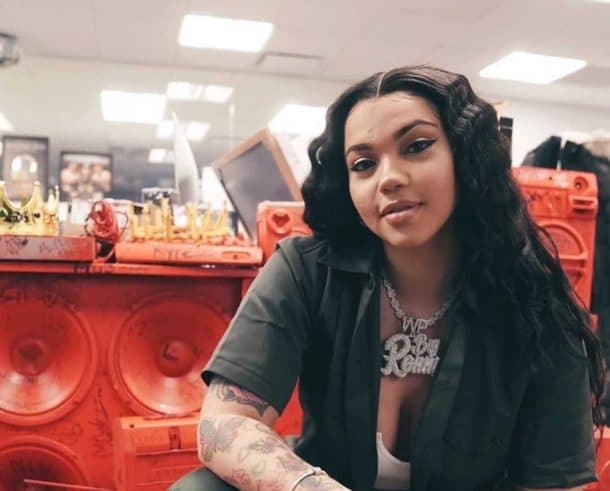 Courtney Rene better known as Renni Rucci is an American rapper, model, and Instagram star. She is best recognized for her hit songs “Roll In Peace” and “Everybody”. Rucci is also popular for her remix version of songs of 21 Savage’s “Bank Account”, Cardi B’s “Bodak Yellow” and Lil Baby’s “Freestyle”. As of 2022, Renni Rucci net worth value is reported around $600 thousand.

Renni Rucci stepped into this world on October 2, 1991, in Irmo, South Carolina, United States. Her real name is Courtney Rene. She belongs of mixed ethnicity as her father is Irish and mother is African-America. She used to get mocked because of her light skin color. As she grew up older, she moved her place to Columbia from where her life started to change.

Renni Rucci Net Worth and Career

Renni started off her career as an exotic dancer where she danced in a strip club. After some time, she decided to give a try in modeling. She has worked as a model for Columbia based modeling agency. Rucci has even modeled for several brands and has appeared in many popular magazines.

At that time, Rucci was getting popular on Instagram through her modeling pictures and flawless dance videos. As time passed, she thought of pursuing a career in music.

Rucci had an early interest in music as she grew up listening to the songs of Lil Baby, Cardi B, Lil Uzi Vert, Future, and others. In 2017, she came with a remix version of popular songs “Bank Account” and “Bodak Yellow”.

Surprisingly, the songs became very popular and gained her wide attention. In December 2017, she released a new single titled “Roll in Peace”. The song became a massive hit, which received more than 2.5 million streams.

In January 2018, she worked on a remix of Lil Baby’s song “Freestyle”. The song received an overwhelming response in a short span of time. In fact, the song was streamed more than 20 million times on different streaming platforms.

Her next big hit came in October 2018, where she released a song called “Asum”. The same year, she released another song titled “Cold Hearted’ featuring Lil Yachty. The song went on to receive 4 million streams in just 5 months.

In January 2021, she dropped a new song titled “Hands on Ya Knees’ featuring Kevin Gates. Likewise, recently on March 3, 2021, she released an official video of her new single titled “Can’t Be” on her self-titled YouTube Channel. To date, the video has generated over 1.3 million views.

Renni Rucci currently stands at a height of 5 feet 5 inches or 165 cm tall and weighs around 55 kg or 121 pounds. Her body measurements are 32-26-36 inches. Likewise, her hair color and eye color are both dark brown.

Who is Renni Rucci’s Boyfriend?

Renni Rucci is currently dating one of the HipHopDX’s2021 rising stars, Foogiano. She seems to be sharing a strong bond with him as she frequently shares a picture with him on Instagram.

Prior to dating Foogiano, she was in a relationship with some unknown rapper. She even had two kids from her mysterious relationship.

Renni Rucci is slowly turning out to be a big celebrity with her few hit songs. She has successfully bagged the handsome fortune of $600 thousand by 2022. Besides music, she has also earned a hefty sum from endorsements and modeling for various brands.