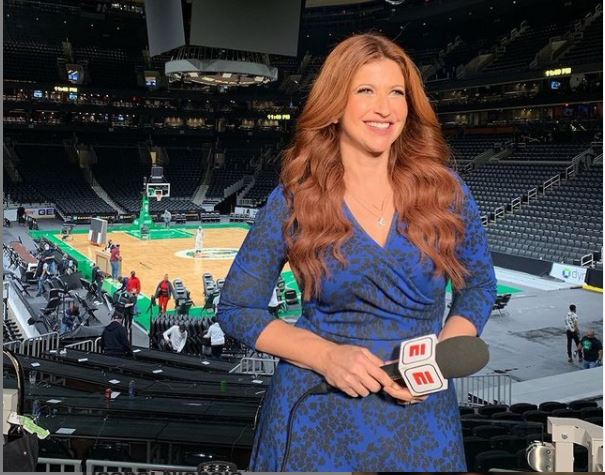 Rachel Nichols is an American sports broadcaster, who is working for ESPN. She is best recognized for hosting an NBA discussion show “The Jump”. As of 2022, Rachel Nichols net worth is estimated to be around $10 million.

Rachel Nichols was born on the 18th of October, 1973 in Potomac, Maryland, U. S. Her birth name is Rachel Michele Alexander. She has not specified any details regarding her early life and parents. Rachel grew up along with her two brothers.

For her study, she joined Winston Churchill High School, from where she graduated in 1991. Later she attended the Medill School of Journalism at Northwestern University. She came out as a graduate holding a graduation degree in 1995.

Rachel started off her career in the 1990s, where she took her first step towards the journalism field as a sports journalist. For a year from 1995 to 1996, she also wrote a sports page for the daily newspaper, Fort Lauderdale Sun-Sentinel. Then in 1996, she started covering the news of NHL’s ice hockey team Washington Capitals for the daily newspaper Washington Post.

Rachel began to climb further step in her journalism career after she became associated with ESPN in 2004. Her early work experience with ESPN came for the shows SportsCenter, Monday Night Countdown, and Sunday NFL Countdown. She was a regular part of the sports news shows, where she covered the news on the NFL and NBA. By the time, she was also working as a sideline reporter for the live TV broadcast, Monday Night Football.

Nichols quit ESPN in 2013, and joined CNN, where she hosted the show called “Unguarded with Rachel Nichols”. She hosted the show as a regular series for a year, and from October 2014, the show started airing as an occasional special. Rachel was able to grab the attention through her tough questioning of Roger Goodell, who is a current NFL Commissioner on the matter of the Ray Rice Scandal.

Rachel made her come back to ESPN in 2016, where she started co-hosting a daily discussion show “The Jump”. After three years, she began hosting ABC’s Saturday Primetime, and the NBA Finals. She has also been working as a recurring guest host on the comedy sports broadcast “Pardon My Take”, and TV show “Pardon the Interruption”.

Rachel Nichols is married to Max Nichols, who is a film and music video director by profession. Max is the son of movie and theatre director, Mike Nichols. She tied the knot with Max in a Jewish ceremony in 2001. The wedding venue took place in 2001. She shares two daughters with her husband Max.

Rachel made a diversity comment on fellow ESPN journalist Maria Taylor in July 2020. The video call between Rachel and Adam Mendelsohn was leaked recently where Nichols can be heard questioning ESPN’s decision for selecting Maria Taylor to host NBA Finals coverage and NBA Countdown. She further mentioned that Taylor got the job because she is black, and claimed the job is actually in her contract.

The video call was accidentally recorded which was stored on one of ESPN’s servers. One of ESPN’s employees recorded their conversation and forwarded it to other companies, and then it was sent to more employees. The call record was finally reached to Deadspin and the New York Times.

You May Also Like:   Rachel Maddow Net Worth: How Rich Is the Television Host in 2022?

After Taylor got to know about Nichols’s comment, she declined to host “NBA Countdown”, however, she later decided to change her decision only if Nichols would not appear on the show. At first, ESPN agreed to her, and but later they ignored her by airing prerecorded segments with Nichols.

Rachel Nichols has gathered an approximate net worth value of $10 million by 2022. She has been able to earn a colossal figure from her journalism career. Rachel must be getting a hefty sum from ESPN, though we are yet to get her exact earning detail.

Malika Andrews Net Worth: How Rich is the ESPN Journalist Actually?

Ree Drummond Net Worth: How Rich is the Pioneer Woman Actually?