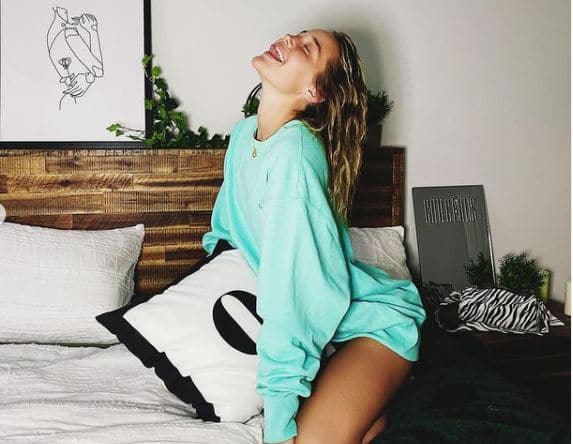 Olivia Ponton is an American Instagram star, who is best known for her modeling, travel, and lifestyle-related pictures on Instagram. She is also a model, who has worked for the modeling agency, Wilhelmina USA. As of 2022, Olivia Ponton net worth is estimated to be around $900 thousand.

Olivia Ponton was born on 30th May 2002 in Naples, Florida, United States. She has not unveiled any information regarding her early life, and parents. Though, we came to know that she has a sister. On May 4, 2020, she shared a tweet mentioning her sister as a worse driver. For her study, she joined Naples High School.

Olivia started her career by posting stunning pictures on Instagram. Within a short time, she was able to gather a massive fan following. She is currently followed by 3.3 million followers on her official Instagram. Olivia has most recently posted an eye-catching picture on Instagram promoting the fashion brand, boohoo.

Olivia has also been a busy model. She was signed to one of the top modeling agencies in the USA,  Wilhelmina Models. Her glamorous looks and mesmerizing figure have certainly helped her to gain major attention from the people. Besides being a popular model and Instagram star, she is also a famous TikTok star.

You May Also Like:   Abbie Herbert Net Worth: Height, Age, Bio, Husband & More

Olivia has in fact more followers on TikTok, where she is currently followed by 6.5 million people. She seems quite active on TikTok. Most of her videos have been able to garner over a million views. Her recent lip-sync video made on the song cheese gained her over 2.7 million views.

She also has her own self-titled YouTube channel, which has 145k subscribers. Though, she doesn’t seem much active on YouTube. She has made just 13 videos from the date she opened her YouTube channel on June 9, 2020. On April 25, 2021, she made a recent video with the title “Easter Egg Hunt”. The video has been able to garner over 65K views.

Olivia Ponton was in a relationship with TikTok star, Kio Cyr. The two social media stars started dating in march 2020. However, their relation didn’t last for long. After 4 months of dating, they broke up. Olivia was rumored to be dating her best friend, Darianka. Since then, the rumor started on her being a lesbian. The rumor became strong after she started posting series of TikTok videos with TikTok star, Kaila Novak.

In June 2021, she finally confirmed being a bisexual. While talking to Teen Vogue, she said “I want to announce that I’m bisexual, and I’m now proud to be a part of the LGBTQ+ community”. She also confirmed being in a relationship with Kai Novak.

Olivia Ponton has gathered an approximate net worth value of around $900 thousand. She has earned a hefty sum from endorsing and promoting famous brands such as Dolls Kill, Skywear, Urban Outfitters, BodyBlendz, Peppermayo, and PrettyLittleThing.

Bramty Juliette Net Worth: How Rich is the YouTuber Actually?

Bentellect Net Worth: How Rich is the TikTok Star Actually?