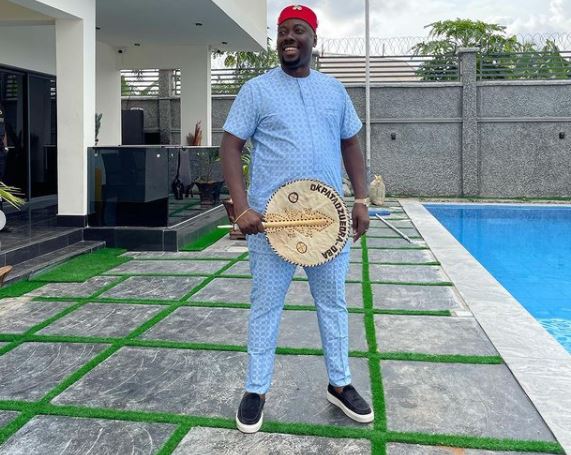 Obi Iyiegbu, better known as Obi Cubana is a 47 years old Nigerian Based businessman, entertainer, and philanthropist. He is the owner and chairman of the Cubana Group. As of 2022, Obi Cubana net worth is estimated to be around $500 million.

Obi Cubana is recently in news for immortalizing his late mother with a $100,000 diamond pendant, and neckpiece.

Obi Cubana was born on the 12th of April, 1975 in Nigeria. He is originally from a community in Demili-South Local Government Area based in Anambra State, Nigeria. Obi lost his mother in December 2020. For his study, he joined the Central Primary School from where he received his first school leaving certificate. Then, he attended Dennis Memorial Grammar School, where he received his West Africa Senior School Certificate.

Obi joined the University of Nigeria in 1998 to study Political Science. He started working at Ibiza Club in 2006. After gaining experience in the club business, he established his hospitality club, the Cubana Group in 2009, The club was started to provide all-around entertainment satisfaction. He has initially started the club in Owerri, the Imo state capital of Nigeria. To date, he has spread the club in various other states like Lagos, Enugu, and Abuja.

Cubana has worked closely with his former associates, a Cubana Chief Priest who helped him to manage his entertainment conglomerates all around the nation. Besides the entertainment group, he has also started working on other businesses like Cubana Real Estate, and Cubana Dubai. For his business achievement, he has been awarded several awards and recognition.

You May Also Like:   Michael Lewis Net Worth: How Rich is the Author Actually in 2022?

Obi was awarded a Young Entrepreneur of the year in 2016, Democracy Heroes Award in 2018, The RightVille School special leadership Award in May 2017, Ghana-Nigeria Achievers Award in 2017, Northern Nigeria Peace Summit/Award in 2017, and Nigeria Film corporation Entertainment as Icon Award in 2017.

Cubana is married to a lawyer, Ebele Iyiegbu in 2008. He shares four sons with his wife Ebele named; Alex, Ebube, Ifeanyi, and Kosisochukwu. His wife, Ebele is the owner and founder of the non-government organization, KIEK foundation.

Obi Cubana has recently demonstrated his wealth by immortalizing his late mom with a diamond pendant and neckpiece worth $100,000. At the time of his mother’s burial in December 2020, he received 346 cows, 20 Rams, and 72 Goats. He also received 46 cows from his former employee, Cubana Chief Priest, and 10 cows from a young billionaire, Jowe Zara.

Obi Cubana, who is also known as a Nightlife entrepreneur has gathered a colossal net worth of around $500 million. He has a huge collection of luxurious cars such as Lexus LX, Mercedes Benz 4matic S450, Range Rover, and Rolls Royce Phantom. As per reports, all clubs that are spread over the different states of Nigeria are worth more than $2 billion.

Tom Ford Net Worth: How Rich is the Fashion Designer Actually?

Aurora James Net Worth: How Rich is the Fashion Designer in 2022?