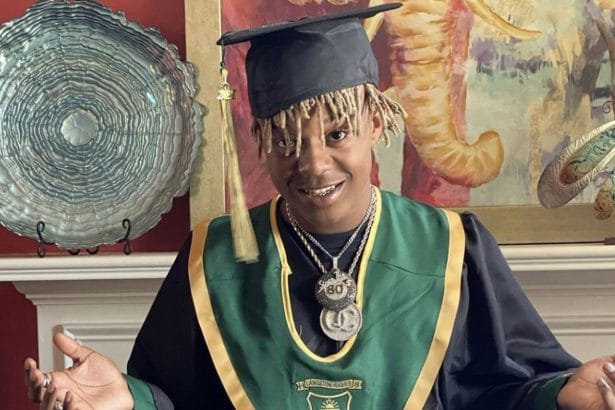 Metro Marrs is an 19 years old young rapper from Atlanta. He is best known for his hit songs “Bye Felicia” and “Oh Yeah”. Marrs was recently arrested by police for throwing $10,000 at his high school graduation ceremony at Atlanta’s Langston Hughes High School. As of 2022, Metro Marrs net worth is estimated to be around $50 to $100 thousand.

Metro Marrs was born in Atlanta, United States of America. His real date of birth is still missing. Though we came to know that he is 19 years old. His father, Young Trimm is also a rapper. He was actually inspired by his father to take music as his career goal. Marrs was 5 years old, when his father, Young Trimm was signed by the record producer Tricky Stewart’s record label, Red Zone.

Metro is blessed with a distinctive melodic voice. He started working on his own song around in 2018. His early song titled “No Stoppin’ Me” was released in April 2018. The official music video of the song was released on April 14, 2018, on YouTube. However, the music video didn’t get a good response.

Soon, he came up with his another single titled “Toast It Up”, which was released in November 2018. The song also failed to get good views on YouTube. Following that, he kept on working on his other songs, and released few songs like “Irregular”, “Racks Up”, “Wish Me Well”, and “Go Big or Go Home”.

You May Also Like:   Trina Net Worth: How Rich is the Rapper Actually in 2022?

Marrs continued working on his next songs, and in July 2020, he came up with a song titled “Oh Yeah”. The song was loved by the people, and it went on to receive over 172K views on YouTube. His melodic voice on the song also grabbed the attention of QC’s Coach K and Pee Take.

In December 2020, Marrs released an official music video of the song “Bye Felicia”. To date, the video has received over 824K views on YouTube. Marrs came up with a new song titled “Nonchalant” in January 2021. The song became a massive hit, receiving over 1 million views on YouTube. It was one of the songs from his debut mixtape, which is scheduled to be released soon in 2021.

Metro Marrs has not specified his current relationship status. Thus, he is assumed to be single. Marrs has been recently been arrested by the police. He was arrested at his high school graduation ceremony, where he showered $10,000 on the stage. The school officials were not happy with his childish behavior, and in the end, the police detained him on the charge of disorderly conduct and incitement of a riot.

You May Also Like:   NORE Net Worth: How Rich is the Rapper Actually in 2022?

Metro Marrs has amassed an estimated net worth of $50 to $100 thousand by 2022. Though, it is just a prediction since his real net worth value has not come out yet. Marrs might also be earning a satisfying amount from his self-titled YouTube channel, where he has 2.8K subscribers and over 2.6 million views.

Nef the Pharaoh Net Worth: How Rich is the Rapper Actually?