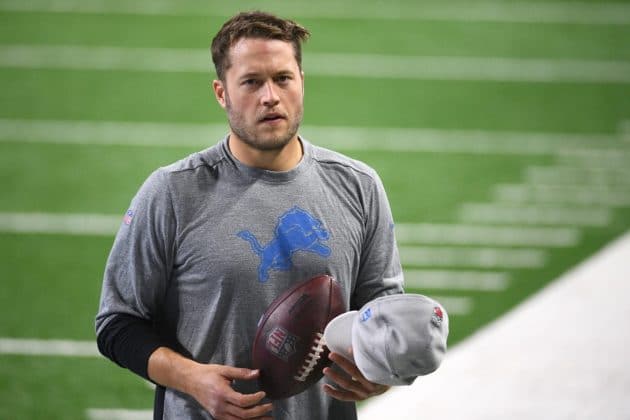 Matthew Stafford was born on the 7th of February, 1988 in Tampa, Florida, United States. He was born to his parents, John and Margaret Stafford. Matthew grew up in Dunwoody, Georgia, and Dallas, Texas. He has studied at Highland Park High School.

Matthew has started playing football in high school, and there he was considered one of the best high school quarterbacks in the U. S. in the class of 2006. Stafford helped his high school team to get victory in the UIL 4A Division I State Championship with a record score of 15-0. In 2005, he received the Best Arm Awards and won the MVP at the 2005 EA Sports Elite 11 Quarterback Camp.

Matthew continued his good form while studying at the University of Georgia. He made his debut in the 2006 season wearing a Number 7 jersey against Western Kentucky. Stafford led his team to get the victory with 48-12, where he made 40 yards and one touchdown pass.

Stafford turned into a professional in April 2009 after he was picked up by the Detroit Lions in the 2009 NFL Draft. He was announced as the starting quarterback for the Lions by the head coach Jim Schwartz on September 6, 2009. He threw 5 touchdowns against the Cleveland Browns on November 22, 2009. He was the youngest quarterback to throw five touchdowns after the tough game with the Browns.

Stafford recently made his debut for the Rams at SoFi Stadium on September 12, 2021. In the game, he finished with 321 passing yards, 3 touchdowns, and 0 interceptions. With his brilliant game, his team was able to get victory over the Chicago Bears with a score of 34-14.

Matthew Stafford is a married man, who tied the knot with a lady named Kelly Hall. Kelly is the sister of former NFL player, Chad Hall. They exchanged their wedding vows on April 4, 2015. Together, they share four daughters.

Kelly went through 12-hour surgery in April 2019 as she revealed through her Instagram that she was suffering from a brain tumor. His wife, Kelly was present to support him in his first match with the Rams on September 12, 2021. Though, the broadcaster made a mistake in pointing out the real Kelly Stafford during the match.

After Stafford watched the match, he pointed to the broadcast “That’s not my wife”. Kelly was actually wearing the yellow shirt that has No. 9 on it.

As of 2022, Matthew Stafford’s personal wealth is estimated to be around $80 million. He was signed by the Detroit Lions for $41.7 million in the 2009 NFL Draft. Stafford is the second player to receive the most guaranteed money in NFL history.

Damon Arnette Net Worth: How Rich is the Raiders Cornerback?

JB Holmes Net Worth 2022: How Rich is the Golfer Actually?