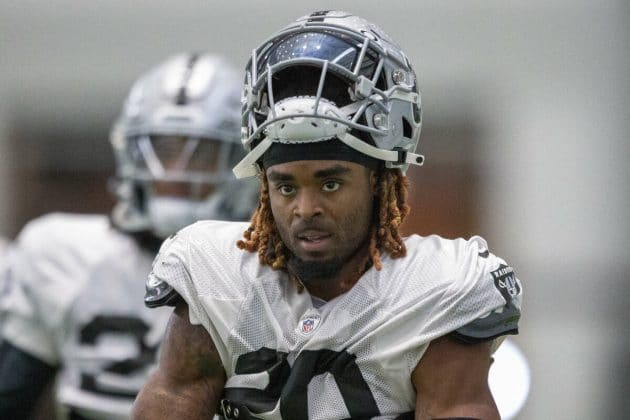 Damon Arnette is a 25 years old American football cornerback. He is best known for playing in the National Football League (NFL) for the Las Vegas Raiders. He was selected by the Raiders in the 2020 NFL Draft. On November 8, 2021, Arnette was released by the Las Vegas Raiders after a video of him threatening to kill someone was surfaced online. As of 2022, Damon Arnette net worth is estimated to be around $3 million.

Damon Arnette was born on the 2nd of September, 1996 in Dallas, Texas, United States. His family shifted their place to Fort Lauderdale, Florida when he was just 2 years old. For his study, he joined St. Thomas Aquinas High School. He was playing as a wide receiver and linebacker during his high school days. Damon was brilliant in the game as a senior, where he helped his team to get the title of a state championship.

Arnette was about to join South Carolina University to play college football, however, he later made a commitment to Ohio State. He played as a key reserve at defensive back for Ohio and made 21 tackles with 1 interception in 13 of Ohio State’s games. Damon also had a good game as a redshirt sophomore, where he appeared in 12 of the Buckeyes 14 games.

You May Also Like:   Matt Barnes Net Worth: How Rich is the Basketball Player Actually?

Damon was in excellent form as a sophomore player, where he was leading the team’s cornerbacks with 44 tackles with 8 passes and 2 interceptions. He was also named honorable mention All-Big Ten Conference. Arnette continued his good form as a junior where he had 40 tackles and 1 interception in 13 games he played. He was about to enter the 2019 NFL Draft by leaving his final season, however, he later decided to continue his study and attended a final year of eligibility at Ohio State.

Damon secured a place in the team in the 2021 season as a backup cornerback, however, in week 4, he was again placed on injured reserve. He was released by the Raiders on November 8, 2021, after a video of him giving life threats to his fan went viral on the internet.

Damon Arnette has not provided enough detail on his personal life yet. Though, he is believed to be living a single life. Damon was sued in an alleged hit-and-run crash in October 2020. He reportedly hit the woman near the team facility when he was rushing for a team meeting. The injured woman has reportedly sued him for $92,000 in damages.

As of 2022, Damon Arnette’s personal wealth is estimated to be around $3 million. He was signed by the Las Vegas Raiders in the 2020 NFL Draft for a whopping $13.4 million with a signing bonus of $7.3 million.

Corey Benjamin Net Worth: How Rich is the Retired NBA Player?

Matthew Stafford Net Worth: How Rich is the Rams’ Quarterback?