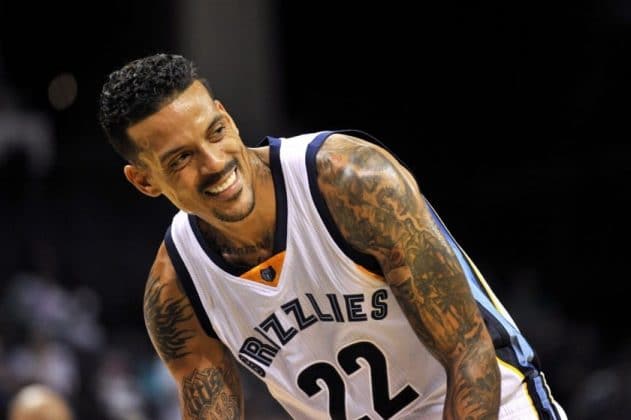 Matt Barnes is an American former basketball player. Barnes has played 14 seasons in the National Basketball Association. In his last season, he won an NBA Championship playing with the Golden State Warriors. As of 2022, Matt Barnes net worth is estimated to be around $13 million.

Matt is currently working as a co-host of the podcast, All the Smoke. He had clash of words with former basketball player, Kwame Brown. Barnes wants Brown to come on his podcast, and talk face to face with him.

Matt Barnes was born on 9th March 1980 in Santa Clara, California, United States. His father is an African American, and his mother belongs of white descent. For his study, he joined Campo High School, where he was actively participating in football and basketball. Later, he attended the University of California, Los Angeles (UCLA). There, he played four seasons of college basketball.

Barnes was picked up in the 2002 NBA Draft by the professional basketball team, Memphis Grizzlies. However, he didn’t stay for long with the team, as he was immediately traded to the Cleveland Cavaliers.  In 2003, he was signed to the new team, Long Beach Jam. There, he competed for the American Basketball Association (ABA) Championship, and eventually with the new team, he got the victory with winning points 24-7.

Matt was quite impressed with his performance in the championship, which led him to earn a contract with the new professional basketball team, Los Angeles Clippers for 2nd half of the 2003-04 season. He was signed into a new team, Sacramento Kings in October 2004. In his first game with Kings, he recorded an average of 17 points and 9 rebounds. In October 2005, he was signed to New York Knicks with a free-agent contract. He played six games with the team and joined the Philadelphia 76ers.

You May Also Like:   Marcus Jordan Net Worth: How Rich is Michael Jordan's Son?

Matt was signed to the new team, Golden State Warriors in 2006. He got a chance to show his skill on the field when the forward Mike Dunleavy, Jr. was placed on the bench. Barnes set a Warriors franchise record by hitting 7 three-point three goals. His offense was impressively improved a lot from 3 points a game to 9.8. He played a total of 76 games for Philadelphia.

Barnes played with Phoenix Suns for a year, during which, he received 2 game suspension. Following that, he played with Orlando Magic for 2 years. Then, he was with Los Angeles Lakers for two years from 2010 to 2012. Barnes made a comeback with Los Angeles Clippers in September 2012. He was announced Defensive Player of the Year in June 2013. Barnes reunited with Memphis Grizzlies on June 25, 2015.

Barnes was signed to Sacramento Kings on July 9, 2016. However, he left the team on February 20, 2017, and joined Golden States Warriors on March 2, 2017. The Warriors were victorious in the NBA Finals of the 2017 NBA Championship. With the win, Barnes received his first championship ring after 16 years, and 14 seasons playing in NBA. Barnes made an announcement of his retirement from NBA on December 11, 2017, through a post on Instagram.

Matt Barnes was married to the reality star, Gloria Govan. They shared the wedding vows in 2012 and separated after two years. The pair shares twins, Carter and  Isaiah. Matt is currently dating a plus-size model, Anansa Sims. The couple had reconciled again in March 2021, after their split in 2020.

You May Also Like:   MyKayla Skinner Net Worth: How Rich is the Gymnast Actually?

Barnes is currently having a heated argument with Kwame Brown on Twitter, asking him to appear on his Podcast. Brown had actually made a comment on him saying “The only joke you got is about basketball, I got a joke about your life, you punk bitch”. He was recalling back his past incident with Derek Fisher, and also insulted Barnes calling him Becky with the good hair.

As of 2022, Matt Barnes’ personal wealth is estimated to be roughly $13 million. He has gathered a vast chunk of money from his professional basketball career. According to some websites, he was earning an annual salary of $3.4 million. Matt has been fined many times in his career. He was fined $35,000 for defending his violence against New York Knicks, Derek Fisher in their October scuffle.

Ryan Braun Net Worth: How Rich is the MLB Player Actually in 2022?