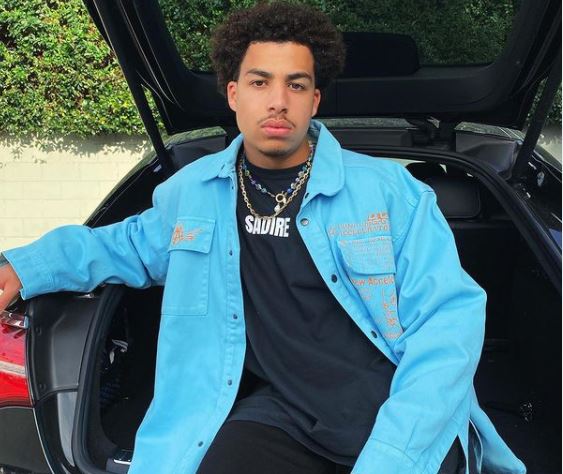 Marcus Scribner is an American actor best known for portraying the role as Andre Johnson Jr. on the sitcom Black-ish. As of 2022, Marcus Scribner net worth is estimated to be around $2 million.

Marcus was born on January 7, 2000, in Los Angeles, California. His father Troy Scribner is black while his mother is biracial. He also has a sister named Athena Scribner in his family.

Regarding his education, he attended Elementary School and began studying acting at the age of 7. Although he was very much interested in acting, he also enjoyed sports like basketball and lacrosse. He went to public high school in 2014. A year, later he studied from home to accommodate his work schedule.

Scribner started his acting career in 2010 as a guest star on the drama series ‘Castle’. A couple of years later, he starred again in a guest role in the television series ‘New Girl’ and ‘Wedding Band’.

His big breakthrough came at the age of 14 when he booked his major role as Andre Johnson Jr. in the ABC sitcom ‘Black-ish’. He has been in the show since 2014. He first auditioned for the show when he was 13 years old.

You May Also Like:   Trevor Moore Net Worth: How Rich was the Comedian Actually?

Scribner has received an NAACP Image Award nomination for Outstanding Supporting Actor in a Comedy for his brilliant performance in the first season. He is also known for giving his voice to movies. In 2015, he voiced Buck in the animated movie ‘The Good Dinosaur.

In 2016, Scribner voiced the role of Smudge on the Netflix animated series ‘Home: Adventures with Tip & Oh’. The same year, he started production on the comedy movie ‘Alexander IRL’. In addition to that, he has also appeared in several movies like Confessional, The F**k-it List, and Farewell Amor.

Nothing much is known about his relationship status as Marcus is quite a private person. In a recent Instagram Live, he seems to suggest that he was in a relationship with someone in the summer of 2020.

In an episode of the Wendy Williams Show, he refused to share details on his romantic life. He said, “Currently, it’s complicated, We’ve got stuff going on. We’ve got yeah, I’ll leave it at that”.

As of 2022, Marcus Scribner’s personal wealth is estimated to be around $2 million. A vast chunk of money comes from his role as Andre Johnson Jr. on the sitcom ‘Black-ish’. His appearance on other movies and TV shows has also contributed massively to his net worth.

Joey Lawrence Net Worth: How Rich is the Actor Actually?

Kevin Costner Net Worth: How Rich is the Actor Actually in 2022?