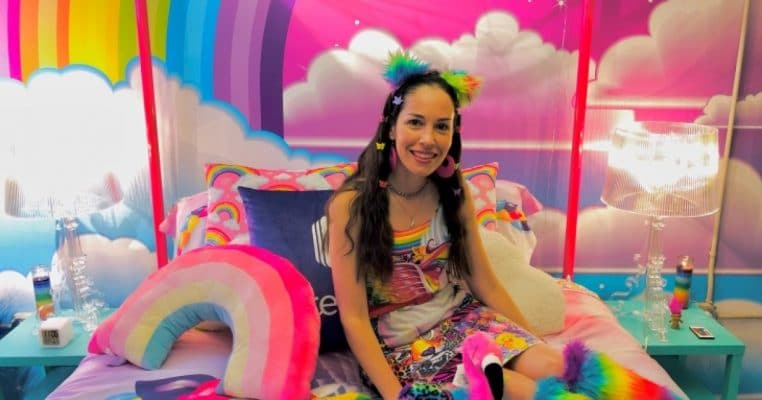 Lisa Frank is a 67 years old American businesswoman. She is the founder of Lisa Frank Incorporated, which produces waggish commercial design for school supplies and similar other products that is specially marketed to children. Lisa’s commercial design mainly features neon colors, rainbows, and various animals like unicorns, dolphins, and pandas. As of 2022, Lisa Frank net worth is estimated to be around $200 million.

Lisa Frank was born on the 21st of April, 1955 in Michigan, United States of America. Her father was an art collector, who introduced her to the artwork. Through her father, she also got to meet many known Pop Art artists like Peter Max.

Regarding her education detail, she has studied at the Cranbrook Kingswood School based in Michigan. Following graduation from Cranbrook in 1972, she joined the University of Arizona where she studied art. While she was studying in her sophomore and junior year at the university, she came up with a line of plastic jewelry, which she named Sticky Fingers.

The jewelry line was made up with specializing in novelty character pendants and colorful fruit. She also utilized animated cartoon characters in her designs like Betty Boop. Her initial jewelry line later helped her to create the first set of colorful stickers. In 1979, she founded the private non-profit company, Lisa Frank Incorporated. She was 24 years old when she founded the company.

At the initial stage, the private company produced only stickers featuring her original characters and designs. All her designs were colored using an airbrush technique which took nearly 9 to 36 hours to complete. In 1987, the company started producing school supplies for children featuring Frank’s original designs. It was then when the company’s success peaked up the graph as the school supplies were getting popular among children.

The company’s products became more popular after it started to produce artwork featuring neon colors, rainbow, and stylized depiction of animals such as unicorns, pandas, and dolphins. During the 1980s and 1990s, the company’s school supplies like lunchboxes, Trapper Keepers, toys, and stickers became the first choice of middle school and elementary-aged girls.

Lisa Frank was married to James A. Green, who served as CEO and President of Lisa Frank Incorporated from 1990 to October 2005. She tied the knot with Green in 1994. Together, they share two sons named Hunter and Forest.

In September 2005, Lisa filed a divorce with James, and soon after filing for divorce, she sued James to remove her from her company. After James resigned from the company in October 2005, the court decided to give full control of the company to Lisa.

You May Also Like:   Sara Blakely Net Worth: How Rich is the Entrepreneur Actually?

As of 2022, Lisa Frank’s personal wealth is estimated to be around $200 million. She has gathered the colossal amount from running her company, Lisa Frank Incorporated successfully for over four decades. It was reported that during her divorce from Green, the company generated a whopping $1 billion in revenue since its starting year 1979.

Tim Stokely Net Worth: How Rich is the CEO of OnlyFans Actually?

Armando Montelongo Net Worth: How Rich is the Entrepreneur Actually?