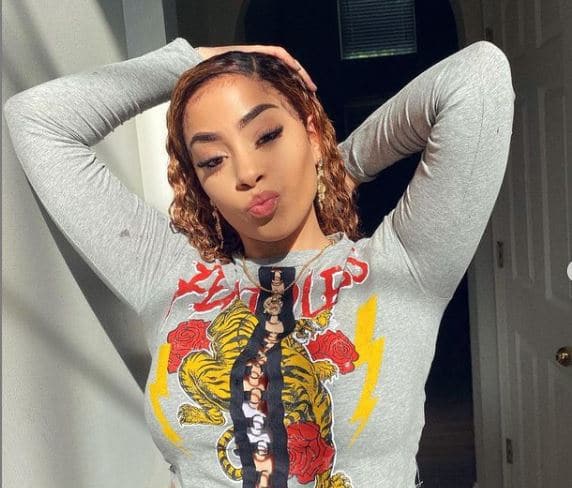 Layton Greene is an American R&B singer and soul recording artist. She is best known for her song “Roll n Peace Remix”, which received 4 million listens in just one month. Greene is currently signed to the recording label, Quality Control Music. As of 2022, Layton Greene net worth is estimated to be roughly $600 thousand.

Layton Greene was born on the 4th of December, 1998 in East St. Louis, Missouri, United States. She was primarily raised by her biological mom and stepfather. She was 14 years old when her mom and stepfather separated. Greene also has an elder brother. At one point, she along with her mother and brother became homeless and has survived living out of the motel.

Greene has shared she has been lonely and sheltered in her childhood life. She ran away with a much older man before she turned 18. However, she stayed for just a few months with the man and moved to Tennessee where she lived with her relatives.

Layton grew up listening to the songs of Keyshia Cole, and Mary J. Blige. Their songs motivated her to pursue a career in music. In 2011, she gave an audition in the reality show “The X Factor”, where she showed her singing talent. However, it turned out to be an unsuccessful venture for her. Later, she gave a try in another reality show “The Voice”.

Despite getting rejected in the few reality shows, she kept on following her musical dream. In the initial phase of her career, she started sharing short clips on social media. In 2017, she made a cover on Kodak Black’s song “Roll in Peace”, which turned out to be a breakthrough in her career. Considering the popularity of her cover song, she later dropped “Roll in Peace Remix”.

The remix version of the song worked like a charm for her as it went on to receive over 15 million spins on SoundCloud. The single also peaked at the 12th spot on the Billboard Hot R&B Songs chart. The official music video of the song was released on May 16, 2018, on her self-titled YouTube channel. To date, the music video has garnered over 25 million views.

Greene came up with her original song “Myself” in May 2018. The song received an overwhelming response from music lovers. She released the official music video of the song on July 8, 2018. As of now, the music video has been viewed by more than 26 million people.

You May Also Like:   Kirk Franklin Net Worth, Age, Bio, Kids, and Tour

Layton was signed to the recording label, Quality Control Music in February 2019. She became the first R&B singer to get signed on the recording label. Layton came up with the amazing song “Leave Em Alone” in 2019. The song got peaked at the 5th spot on the US R&B chart. It was even certified gold by RIAA. Greene has also been releasing her new songs on her self-titled YouTube channel. Her recent song includes “Choices”, “Chosen One”, and “Outside”.

Layton Greene has not spoken much about her personal life. She is neither seen posting any information regarding her love life on Instagram, where she is followed by 1 million people. As of now, Layton seems to be busy making her songs rather than getting into media buzz for her relationships.

As of 2022, Layton Greene’s net worth is estimated to be roughly $600 thousand. She has been able to collect a hefty sum from her music career. Layton might also be earning a handsome amount from her self-titled YouTube channel where she has 758K subscribers and over 291 million views.

Nivea Net Worth: How Rich is the Singer Actually in 2022?

Matt Mauser Net Worth: How Rich is Christina Mauser’s Husband?