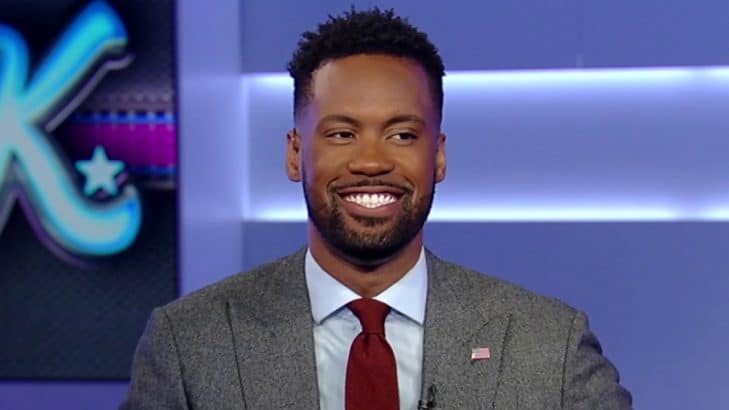 Lawrence Billy Jones III, simply known as Lawrence B. Jones is an American conservative political commentator. He is best known for working as a contributor at Fox News. Jones claimed prominence in 2015 after he raised money for a pizza shop, which was refusing to cater a gay wedding. Jones recently took a new role as an enterprise reporter at Fox & Friends franchise. As of 2021, Lawrence B Jones net worth is estimated to be around $1.5 million.

Lawrence Jones was born on 10th December 1992 in Texas, United States. He was born to his parents, Lawrence Jones II and Tameria. Jones still shares a close with his mother. On May 9, 2021, he shares an old picture with his mom on Instagram on the special occasion of Mother’s Day. For his study, he joined Garland High School, and he came out as a high school graduate in 2011.

Jones later attended the University of North Texas, from where he earned a University degree in political science and criminal justice. Jones became the youngest employee of the Garland Independent School District, where he was hired as a student advocate. At 19 years of age, he ran on the school board for a seat, however, he was not able to get a victory there.

In his early days, he also worked for the Dallas County Child Welfare as one of its board members. He served as a board member for two years. Jones came into notice of people for the first time when he created a fundraiser for a pizza shop, Memories Pizza in April 2015. The shop was closed after its owners refuse to cater a gay wedding. From the fundraising, he was able to raise $844,000, which was partly donated to the owner’s church and other amounts to charity.

Lawrence B Jones Net Worth & Career in Journalism

Jones started off his early journalism career working as a contributor on the conservative TV show called Dana. Later he started hosting a radio show called “The Lawrence on Jones Show” on TheBlazeRadio Network. In 2018, he started working as an editor-in-chief for the conservative website, Campus Reform. After a year, in 2019, he moved to New York City and started working at Fox News.

Lawrence also covered a Fox News segment before in April 2019. While working for the segment, he wore a bulletproof vest, while he was covering the news at the U. S.-Mexico border. He was mocked online for wearing a bulletproof vest since other journalists have not used even protective gear in their reporting work at a border region.

Jones later came up wearing even the largest vest in his next reporting for Fox News, where he mentioned he was told to wear a bulletproof vest by U. S. Border Patrol for his safety. Lawrence is still working at Fox News, where he is recently appointed as an enterprise reporter at Fox & Friends franchise.

You May Also Like:   Angel Brinks Net Worth: How Rich is the 'Basketball Wives' Star?

Jones is currently dating a lady named, Sydney. Jones has even confirmed Sydney as his girlfriend by sharing a picture with her on Instagram. On December 16, 2019, he shares a picture with Sydney wishing his fans a Merry Christmas.

Lawrence B Jones Net Worth

As of 2021, Lawrence Jones has earned an approximate net worth figure of $1.5 million. His exact salary from Fox News has not come out yet. But, Jones must be receiving an annual salary of around $72,900 at Fox News.

Crystal Minkoff Net Worth: How Rich is RHOBH Star Actually?