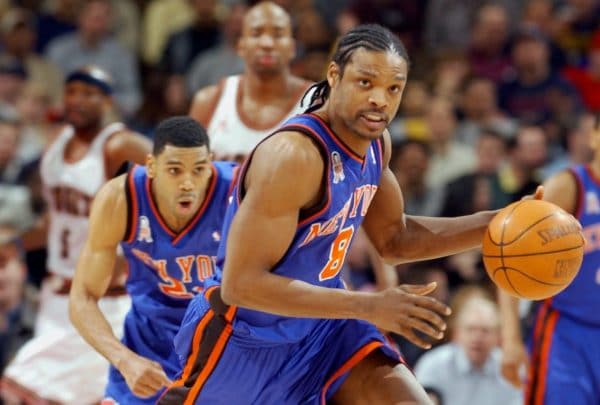 Latrell Fontaine Sprewell is an American former professional basketball player who played for numerous top teams in his career including the New York Knicks, Minnesota Timberwolves, and Golden State Warriors. As of 2022, Latrell Sprewell net worth is estimated to be around $200,000.

He helped the Knicks reach the 1999 NBA Finals and was able to have four NBA all-star selections. Though Sprewell earned more than $100 million in salary alone during his playing years, his behaviors that led to several lawsuits, as well as bad financial management, have led to his net worth degrading massively.

Sprewell studied at the Washington High School located in Wisconsin where he was already an active basketball player during his senior year. Later on, he decided to join the Three Rivers Community College and became part of their Raiders Basketball team where he played for two years.

After his stint there, Sprewell transferred to the University of Alabama where he played till 1992.

Latrell Sprewell Net Worth and Career

After graduating, Sprewell immediately became part of the 1992 NBA draft where he was picked by the Golden State Warriors being selected as the 24th overall. His rookie season was very impressive as he got a lot of game time playing close to 70 matches in that season. Sprewell continued good performances in the coming seasons as well making him stand out as among the top emerging players.

You May Also Like:   Sha'Carri Richardson Height, Age, Bio, Career, Net Worth & More

However, a major incident would occur in 1997 that would dampen his reputation throughout his career. In December of 1997, Sprewell was involved in a disgraceful incident where he disagreed with the head coach of the time P. Carlesimo during their practice.

Since Sprewell was not happy with some of the suggestions that the head coach was telling him to make, he decided to get aggressive which led to him choking the coach for around 10 seconds. Immediately, the other players came to break this altercation but Sprewell was still in a violent mood and had some blows with other teammates too.

This led to Sprewell being suspended for an entire season by the NBA as well as the Warriors deciding that to void the remainder of the contract he had left that was worth around $23 million. This led to a back and forth of Sprewell and the Warriors going to court over the decision. In the following years, he did have success with the New York Knicks even signing a $62 million contract but at the later stages, he had problems being signed for the salary he was asking.

Sprewell has not disclosed the mother of his daughter but the couple is not together anymore. Sprewell has been part of several other controversies in his career other than the 1997 choking incident. In 2006, Sprewell was charged with strangling a 21-year-old girl he was having an affair with. Furthermore, the very next year he was sued for $200 million by a long-term partner.

As of 2022, Latrell Sprewell has an estimated net worth of $200,000. Sprewell was able to earn close to $100 million through the salary that he received over the years in his career. However, it is unfortunate that his net worth has decreased drastically today with him living in a modest rented house today in Milwaukee.

Because of poor financial management, Sprewell at one point owed close to $3 million in taxes to the state of Wisconsin. Furthermore, he also had millions in payment remaining for luxuries he had bought such as boats that led to the foreclosure of two of his homes.

J. R. Smith Net Worth: How Rich is the Retired NBA Player Actually?

PJ Washington Net Worth: How Rich is the NBA Player Actually?