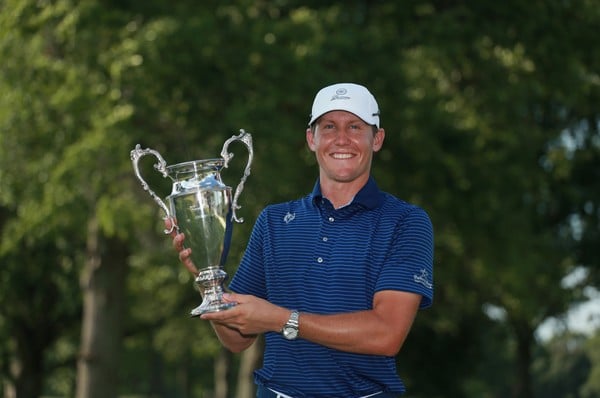 Kramer Hickok is a 30 years old American professional golfer. He is best known for playing on the PGA Tour. Kramer has two PGA Tour Canada wins, and one Web.com Tour win. He is currently ranked 137 in Official World Golf Ranking. As of 2022, Kramer Hickok net worth is estimated to be $1.2 million.

Kramer recently competed at the Travelers Championship, where he lost to Harris English. It was the second-longest sudden-death playoff in the PGA Tour History, which went for eight holes.

Kramer Hickok was born on 14th April 1992 in Austin, Texas, United States. He was born to parents, Doug and Lisa Hickok. His dad, Doug is into the commercial real estate business. He also has an elder brother, Carter, who has followed the footsteps of their father and pursued a career in the real estate field.

Kramer was interested in sports since he was a small kid. In fact, he grew up playing a lot of sports which include football, and soccer. For his study, he joined the University of Texas. The famous golfer, Jordan Speith was also studying there. Both joined as a freshman in the same year.

Hickok caddied for Jordan Spieth, while he competed at the 2011 AT&T Byron nelson. He was playing golf actively while he studied at the University of Texas. In fact, he played for the University’s athletic team, Longhorns for four years. In 2015, he ultimately came out holding a graduate degree in Geography.

Kramer went on to achieve another PGA Tour Canada win at the Ontario Championship on September 10, 2017. He achieved the victory against Johnny Ruiz by facing a tough game in the playoff. During the 2017 season, he received player of the year honors and was named as the Order of Merit winner.

In September 2018, he got his first victory on the Web.com Tour. He finished as the winner of the 2018 DAP Championship by defeating two golfers, Matt Jones, and Hunter Mahan. Kramer won the Championship trophy by 3 strokes. He finished in the top 25 during the 2018 season of the Web.com Tour. His good form in the season helped him to earn the PGA Tour Card for the 2019 season.

Kramer recently competed at the PGA Tour Championship at The Players Championship. He was about to get his first PGA Tour victory against Harris English. However, he lost the 8 sudden-death playoff holes when Harries birdied at the end to defeat Kramer Hickok.

Kramer Hickok is married to a lady named Anne Hakula. His wife, Anne is also a golfer, who played women’s golf at the University of Texas Athletics team. The pair got engaged on 8th December 2019 and shared the wedding vows on 7th December 2020.

You May Also Like:   Mac Jones Net Worth: How Rich is Patriots Quarterback Actually?

Kramer is often seen sharing pictures with his wife on Instagram. On May 17, 2021, he shared a picture with Anne on Instagram, where both welcomed their new pet dog, Elvis.

As of 2022, Kramer Hickok’s personal wealth is estimated to be around $1.2 million. Hickok has been playing golf professionally since 2015, and in these six years, he has participated in various championships. His earning details show that he has earned total earnings of $2,058,770.

Joe Schilling Net Worth: How Rich is the MMA Fighter Actually?