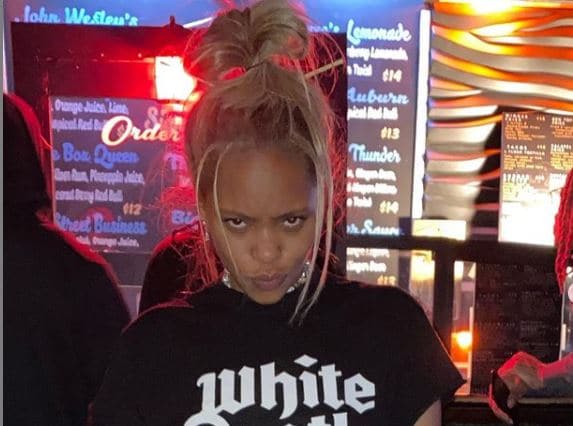 Kodie Shantil Marr, better known as “Kodie Shane” is a famous American rapper. She is best recognized for her 2016 hit single “Sad”. Kodie is also known as a member of the collective rapper group “Sailing Team”. As of 2022, Kodie Shane net worth is estimated to be around $600 thousand.

Kodie Shane was born on October 28, 1998, in Atlanta, Georgia, United States. Her birth name is Kodie Williams. She was born into a musical family. Her dad, Danny C. Williams was one of the members of the R&B trio “Rick, Ran & Dan”. Likewise, her sister named Brandi Williams is a member of the girl group, Blaque. She has an older brother, Lil Wop, who is also a rapper.

Kodie developed an interest in music, following the footsteps of her family members. She, in fact, went on her sister’s music tour many times. At the young age of 14, she started rapping. She is equally blessed as a writer. Kodie has written and recorded her first song “Crown Me”.

Kodie wrote her another song “Sad” when she was just 14. The single turned out as a breakout song for her, which released in 2016. Kodie got a chance to shine as a writer after she became associated with Atlantic production studio. While working as a writer, her singing talent was discovered by Coach K, who was working as a manager for Atlanta Production studio.

With the help of Coach K, she was introduced to rapper Lil Yachty, while he was performing in one of his concerts. Lil quickly noticed the young girl’s singing talent, after she played her song Sad to him. After some time, he went on adding his own version to her track.

On December 2, 2016, she released an official music video of her song “Sad”. The song, as expected, received an overwhelming response. It has gained over 9.5 million views on YouTube as of this writing. After a much-needed breakthrough, he was signed under Epic Records in 2015.

Considering her exceptional singing ability, Lil Yachty offered to be a part of the musical group “Sailing Team”, The group was led by Lil Yachty. Lil came up with a new song titled “All In’ in August 2016, which features Kodie and other team members. The song went on to become a big hit, receiving over 14 million views on YouTube.

To date, Kodie has released three EP. Her first EP titled “Little Rocket” came in June 2016. She dropped her second EP “Zero Gravity” on December 2, 2016. Her hit song, Sad was included as a lead song of EP.

Likewise, she released her third EP “Back to the Future” in August 2017. After a year, she dropped her first studio album “Young HeartThrob” in November 2018. Her recent song “Breathe”, was released in December 2020.

Kodie Shane is currently dating a singer, Skye Morales. The love story between two girls is quite interesting. Skye revealed the interesting story on October 24, 2017, through YouTube. Morales revealed she was actually working on a song when the producer advised her to get feature some fresh voice. The one name that clicked on her mind was Kodie Shane. She instantly messages her through Instagram, and then they started dating.

As of 2022, Kodie Shane’s personal wealth is estimated to be roughly $600,000. She is yet to achieve more success in her career. It is a big money for a 23 years old singer. In the coming days, the amount would be bigger for sure, if she delivers some magical songs in the future.

YFN Lucci Net Worth: How Rich is the Rapper Actually in 2022?

Baby Smoove Net Worth: How Rich is the Rapper Actually in 2022?