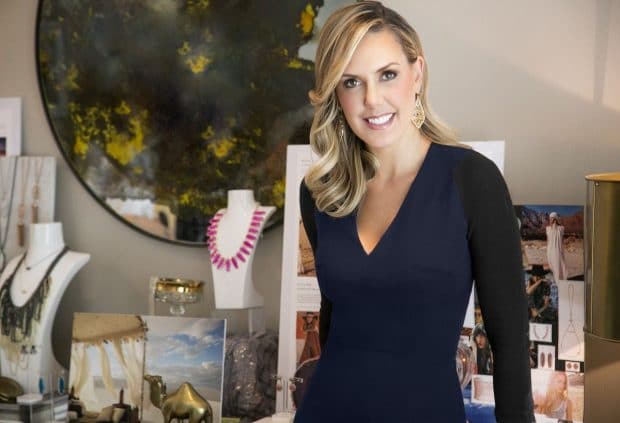 Kendra Scott is an American fashion designer, who currently serves as Executive Chairman of Kendra Scott, LLC. She is also a lead designer for the company. Kendra is the recipient of the EY Entrepreneur of the Year 2017 National Award. She made it to the #40 list in America’s Richest Self-Made Women of Forbes in 2019. As of 2022, Kendra Scott net worth is estimated to be around $800 million.

Kendra Scott was born on the 27th of March, 1974 in Kenosha, Wisconsin. She along with her family moved to Houston, Texas when she was 16. Regarding her education, she has completed her high school graduation from Klein High School.

She then attended Texas A&M University for a year. She dropped out of the University and shifted place to Austin, where she helped her ill stepfather. While staying in Texas, she had started making her own jewelry.

Scott initiated her business venture by opening a business called “the Hat Box”. The business created a comfortable hat design for women through chemotherapy treatment. In 2002, she founded the company, Kendra Scott LLC. She designed her first collection in the spare bedroom of her own home which costs her around $500.

Kendra’s extraordinary designs were selected to accessorize in the Oscar de la Renta’s Spring 2006 Runway Show in 2005. Likewise, her design appeared in Randolph Duke’s 2007 Runway Show. However, she had to shut down her company in 2009 due to the financial crisis. Though, she got her last hope to re-establish her business again after receiving an order from the luxury department store, Nordstrom.

In 2010, she opened her first retail store in Austin. The retail store was opened on Austin’s South Congress Avenue. That same year, she started her e-commerce business and launched her brand’s Color Bar experience. She started her second store in 2011, which was opened on Rodeo Drive in Beverly Hills. Though, the store was closed in a short time.

Scott sold the minority stake of her company in 2016 to the private equity firm, Berkshire Partners. She sold the stake at a valuation of $1 billion. Scott continued to expand her business by opening more retail stores. By the end of 2019, she was able to open a total of 102 retail stores.

Scott stepped down as the CEO of the company in February 2021. Though, she still holds the Executive Chairwoman title in the company. Besides her successful business venture with Kendra Scott LLC, she has also invested in some other companies like Darbie Angell dinnerware and Helm Boots.

You May Also Like:   Dave Portnoy Net Worth: How Rich is the Barstool Sports Founder?

Scott has been involved in many philanthropic activities mainly supporting children and women’s causes. She launched the Kendra Cares Program in 2015, which brought her company’s customizable Color Bar jewelry experiences to pediatric hospitals.

Scott also made a donation of over 75,000 pieces of jewelry and gave some money for local causes. She made a donation of $1 million to The University of Texas in 2019 to launch the Kendra Scott Women’s Entrepreneurial Leadership Institute.

As of 2022, Kendra Scott’s net worth is estimated to be around $800 million. She has bagged a gigantic amount from her successful business venture. Scott was inducted into the Texas Business Hall of Fame in 2019.

Wade Rosen Net Worth: How Rich is the Entrepreneur Actually?

Scott Hassan Net Worth: How Rich is the Entrepreneur Actually?