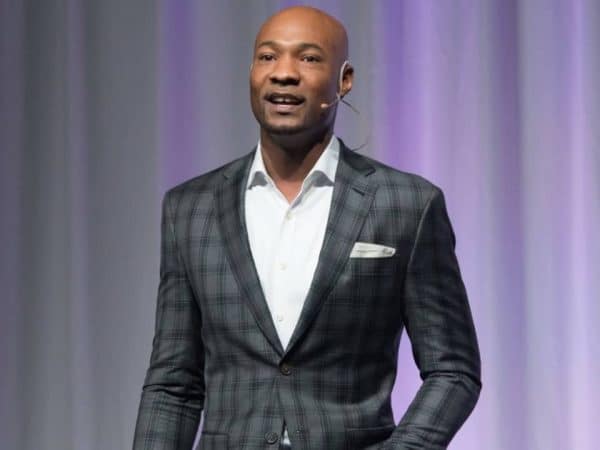 Keion Henderson is a 41 years old American Pastor and motivational speaker. He is the founder, CEO, and Senior Pastor of a church community, The Lighthouse Church & Ministries. As of 2022, Keion Henderson net worth is estimated to be around $7.5 million.

Keion has over 20 years of experience in active ministry, and he has spoken for thousands worldwide. Henderson became engaged to The Basketball Wives executive producer, Shaunie O’Neal on November 11, 2021.

Keion Henderson was born on the 6th of July, 1981 in Gary, Indiana, United States. He grew up in two cities of Indiana; Gary, East Chicago, and Fort Wayne. His mother’s name is Gwen Scott, while he has not spoken much about his father. He has five siblings; Jarvis Wright, Keionna Mskee Singleton, Portia Chandler,  Danyelle Brumley, and Ebony Dennard Methodius-Ngwodo

For his study, he joined the Indiana University-Purdue University at Fort Wayne, from where he received a Bachelor of Arts (B. A.) degree in Interpersonal communication in 2004. Then in 2006, he attended the Faith Evangelical College & Seminary to study the Master of Theology. He studied at the college for two years until he held a Master’s degree in 2008.

You May Also Like:   Louis Diame Net Worth & Wiki: How Rich is Issa Rae's Husband?

While working as a pastor and speaker at the New Horizon Baptist Church, he made a group of over six hundred members within 5 years. Many people followed him for his motivational speeches and powerful leadership. In January 2008, he started working as the CEO of Tax Solutions. He is still serving as the CEO of the company. At the same time, he is also giving preaches at many churches.

In 2009, he shifted his place to Houston, and established a new ministry called “The Lighthouse Church & Ministries”. He is currently serving as the CEO and Senior Pastor at the church. Besides serving as a pastor, he is actively engaging as the organizer of the annual Well Experience Singles Conference.

Keion Henderson was married to the TV personality, Felecia Henderson, who has made an appearance in the TV show, Closet Chats. He tied the knot with Felecia on August 7, 2010, and became the father of a daughter, Katelyn on July 18, 2012. After living together for nearly nine years, the pair separated with divorce in 2019. In July 2021, Keion grabbed the attention of the media portal after he was linked with the Basketball Wives executive producer, Shaunie O’Neal.

You May Also Like:   Tony Khan Net Worth: How Rich is the President of AEW Actually?

On November 11, 2021, Keion put a romantic proposal to the love of his life, Shaunie. He proposed to her bending on one knee and presenting a 4.22 karat radiant-cut diamond ring along with 18-karat white gold band in hand. As per sources, the pair became engaged on a tropical Island at 11:11 pm. After the engagement, he gave a surprise to Shaunie with a beautiful private fireworks display.

As of 2022, Keion Henderson’s personal wealth is estimated to be around $7.5 million. He must be earning an average salary of $48,877 by serving as a senior pastor at The Lighthouse Church.

Bobby Kotick Net Worth: How Rich is the CEO of Activision Blizzard?

Big Meech Net Worth: How Rich is Big Meech Actually in 2022?