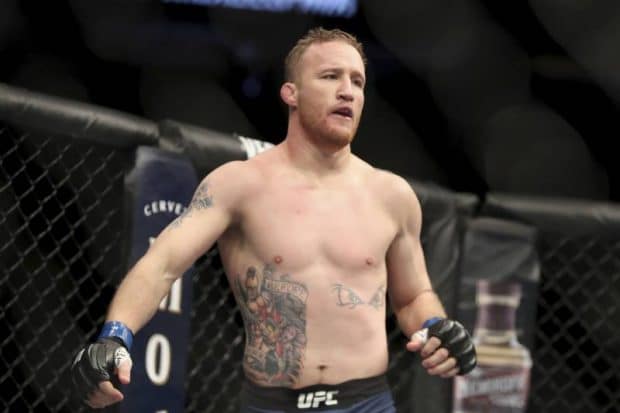 Justin Gaethje is an American mixed martial artist who competes in the lightweight division of the UFC. As of 2022, Justin Gaethje net worth is estimated to be $4.5 million.

Gaethje was born on November 14, 1988, in Safford, Arizona. His mother Carolina is of Mexican descent while his father John Ray Gaethje is of German descent. His mother was a postmaster while his father was a copper miner. Gaethje has two sisters and a twin brother, Marcus John Gaethje, who worked at the Moreni mine for almost 10 years.

Regarding his education, he went to Safford High School where he was a four-time finalist and two-time Arizona State champion as a wrestler. He then went to the University of Northern Colorado where he was named to the Western Wrestling All-Conference First Team.

He began his MMC career during his time at the University of Northern Colorado. He had 7-0 amateur record before making his professional debut against Kevin Croom in 2011. He won the fight via knock out. In 2012, he was signed by the World Series of Fighting and made his debut against Gesias Cavalcante where he won the fight via TKO in the first round.

Gaethje won the WSOF Lightweight Championship against Richard Patishnock where he won the fight via TKO in the first round. He then defended the title against Nick Newell, Melvin Guillard, Luis Palomino, Brian Foster, and Luiz Firmino successfully.

You May Also Like:   LeSean McCoy Net Worth: How Rich is the NFL Player Actually?

On May 4, 2017, he signed with the UFC. His first fight was against Michael Johnson. He won the match via TKO in the second round through a combination of punches and knees. With that win, he earned the Fight of the Night and Performance of the Night award.

His second fight was against Eddie Alvarez. He lost the fight by KO in the third round but managed to earn his second consecutive Fight of the Night bonus award. On April 14, 2018, he fought against Dustin Poirier but he lost the fight via TKO in the fourth round. After the second loss of his MMA career, he came back strong and won series of matches against James Vick, Edson Barboza, and Donald Cerrone.

On May 9, 2020, he fought against Tony Ferguson and won the fight via TKO in the fifth round. With that win, he ended Ferguson’s 12 wins in a row and earned Fight of the Night and Performance of the Night awards.

As of 2022, Justin Gaethje net worth is estimated to be $4.5 million. He earned the majority of that money in his MMA career. His latest paycheck was $350,000 for the fight against Tony Ferguson. That doesn’t include his bonus.