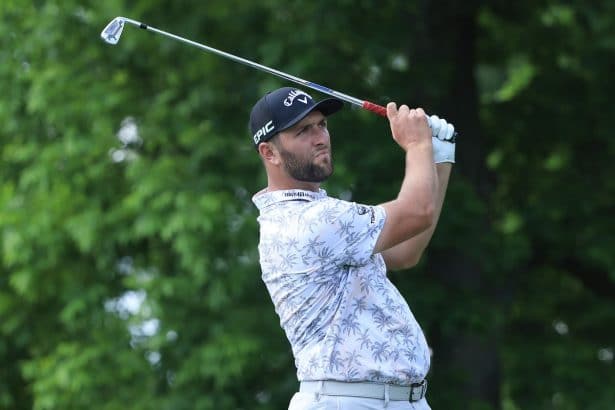 Jon Rahm is a Spanish professional golfer. Rahm has managed to become the best golf player in the world by previously being world number one in the world golf rankings. As of 2022, Jon Rahm net worth is estimated to be around $18 million.

Rahm was born on November 10, 1994, and raised in a place called Barrika in Spain. Regarding his study, he went to the Arizona State University where he graduated with a degree focused on communications. During his time there, Rahm excelled at golf winning a total of 11 tournaments. His early highlights included winning the Ben Hogan Award as well as lifting the 2014 Eisenhower Trophy.

Jon Rahm Net Worth and Career

Before turning professional, Rahm would dominate as an amateur with him climbing up to number one in the World Amateur Golf Ranking and making a world record of being number one for 60 weeks in total. In 2016, Rahm would turn professional and played in the 2016 Open Championship.

He would also participate in the RBC Canadian Open where he managed to come in 2nd place. The next year, Rahm would be part of the PGA tour. He was the winner of the Farmers Insurance Open which was a memorable moment in his career with it being his first-ever PGA Tour win. This would help him to enter the Master’s Tournament as well as other top-level tournaments such as the World Golf Championships.

You May Also Like:   Tony Allen Net Worth: How Rich is the Retired NBA Player Actually?

His great performances in the Masters led to his entry into the top 10 rankings of the world rankings. He would secure his first win on the European Tour as well. A big win for him came when he won the DP World Tour Championship in Dubai. The next year he won the Open de España.

2020 would be a big year for him as after winning the Memorial Tournament, he climbed to number one on the official world golf rankings cementing himself as the best player of the time. Rahm became only the second ever Spanish golfer to have achieved this feat. In June 2021, Rahm became the first Spanish golfer to win the U.S. Open.

Rahm is married and currently resides in Scottsdale, Arizona. When he is not playing golf, Rahm is supporting the Spanish football club, Athletic Bilbao.

Recently, a decision to not take be vaccinated resulted in losing potentially $1.67 million in earnings in the Memorial Tournament in Ohio. Rahm was leading in the tournament but he would test positive for COVID-19 and thus had to withdraw against his will from the tournament. The first prize was $1.67 million while the second prize was $1 million.

Udonis Haslem Net Worth: How Rich is the Miami Heat Player Actually?