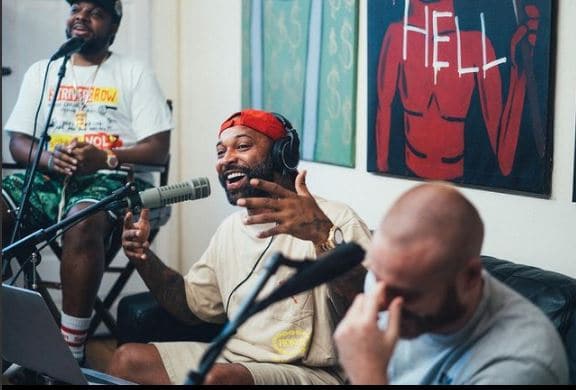 Joseph Anthony Budden II, better known as Joe Budden is a 41 years old former American hip-hop artist and media personality. He is best known for his hit song “Pump It Up”. Joe also became popular as one of the members of hip hop supergroup “Slaughterhouse”. He retired from rap in 2018, and then gained popularity as a broadcaster. As of 2022, Joe Budden net worth is estimated to be around $8 million.

Joe Budden was born on the 31st of August, 1980 in New York City, United States. He was born to his parents, Fay Southerland and Joseph Budden. When he was 13, he shifted to Jersey City, New Jersey along with his mother and elder brother. There, he studied at the Lincoln High School.

Joe was sent to a boarding school, Laurinburg Institute as he was a troubled youth. At that time, he started to hone his skills as a rapper. Joe was addicted to drugs after he returned to Jersey and developed an addiction to angel dust. On July 3, 1007, he voluntarily went into rehab.

Budden started off his music career in 2001 by releasing his first demos and mixtapes after teaming up with the music producer, Dub-B. He eventually secured a major recording deal with the label, Def Jam Recordings in the year 2002. Joe earned his first success through a promotional song titled “Focus”, which peaked at #43 on the list of US Billboard Hot R&B/Hip-Hop Songs chart.

Joe went on to receive further recognition after he released the lead song titled “Pump It Up” from his upcoming album on May 8, 2003. The song was a commercial success which was also featured on his soundtracks for hit movies “2 Fast 2 Furious” and “You Got Served”. Joe released his self-titled eponymous debut studio album on June 10, 2003. The album was a major success which peaked at #8 on the US Billboard 200.

Joe continued his success journey with the release of his two mixtapes “Mood Muzik: The Worst of Joe Budden”, and “Mood Muzik 2: Can It Get Any Worse?”. Both of his mixtapes were critically acclaimed. Budden signed a multi-album deal with an independent record label, Amalgam Digital in December 2007.

Joe released his final solo album “Rage & The Machine” on October 21, 2016, which debuted at 40th spot on the Billboard 200. He retired from rapping in 2018 and began his broadcasting career. Budden has co-hosted a daily morning show “Everyday Struggle” on April 17, 2017. He is currently hosting The Joe Budden Podcast. Joe is also popular for his appearance in the VH1’s reality series “Love & Hip Hop: New York”.

Joe Budden became a father for the first time at 20 years of age. His first son, Joseph Budden III was born on May 11, 2001. He received a warrant for unpaid child support from the Hudson County, New Jersey Sheriff’s Office in 2010.

Budden was also in a relationship with a model, Cyn Santana, with whom, he has a son named Lexington. Joe even became engaged to Santana in December 2018, however, the engagement was called off later. He has also dated a model, Esther Baxter.

Joe has recently revealed himself as a bisexual on Episode 485 of his podcast. In a podcast episode, Joe stated that he is attracted to both men and women. He said “I’m bisexual. How do I spread this news? How do I spread the word? Listen, I like guys and girls. Spread the word. I’m down.” As soon as the bisexual news broke out, he started trending on Twitter.

As of 2022, Joe Budden’s personal wealth is estimated to be around $8 million. He has bagged the wholesome amount from his music album sales, tour concert events, and podcasting career.

Swizz Beatz Net Worth: How Rich is the Rapper Actually in 2022?