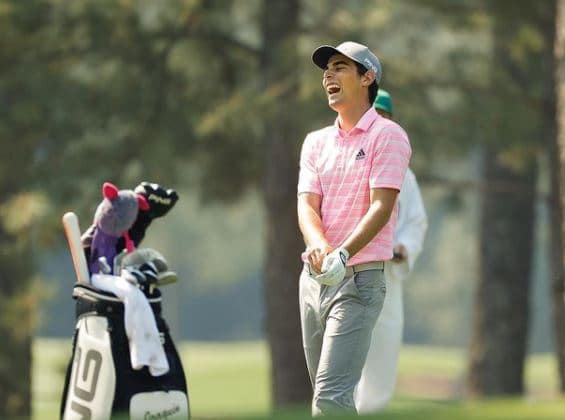 Joaquin Niemann is a 23 years old Chilean professional golfer, who plays on PGA Tour and European Tour. He won his first PGA Tour win at The Greenbrier. Niemann is currently ranked 25 in official world golf rankings 2021. As of 2022, Joaquin Niemann net worth is estimated to be around $9 million.

Joaquin Niemann was born on 7th November 1998 in Santiago, Chile. At two years of age, his father gave him plastic golf clubs. As he was destined to become a golfer, he used to practice golf at Club de Polo y Equitacion San Cristobal. He was able to hit a 40-yard shot at just 4 years of age, and he crossed the long boundary with real equipment.

During a BBQ at his house, Joaquin hit the ball so hard that it went straight to his grandmother, and injured her leg. He was actually having a fun game with his family. Despite his unintentional strike, his grandmother was not seriously injured. Instead of scolding, he was praised by his granny claiming his shot to be pretty good.

Niemann was later recruited by coach Steve Bradley. He was about to play golf at the University of South Florida. However, he was failed to get entry to the University because of his TOEFL scores. Joaquin had an amazing amateur game, winning six championships. He even retained his number one position as an amateur golfer at World Amateur Golf Ranking from May 2017 to April 2018.

Joaquin was honored with a Mark H. McCormack Medal in 2017 for being a top-ranked player in World Amateur Golf Ranking. That earned him an entry in two championships, the 2018 Open Championship and the 2018 U. S. Open. His last amateur victory was the 2018 Latin America Amateur Championship. The victory led him to get an entry into the 2018 Masters Tournament.

Niemann registered his first-ever PGA Tour victory in September 2019 at The Greenbrier. He was just 19 when he won his first PGA Tour win. With that, he claimed the title of being the youngest international golfer who won the PGA Tour at a young age since 1923. Later on, he played at the 2019 Presidents Cup which took place in Australia.

He was playing on the international team at the golf competition, on which, the U. S. team registered a victory with 16-14. He even faced a defeat in a single match, which he played against Patrick Cantlay. Joaquin had a great start off in 2021. However, he faced a defeat against Harris English when he joined him in a play-off.

Just after a week, he competed at PGA Tournament, Sony Open. He was able to reach the final round at the competition, where he loses at the end to Kevin Na, and finished at 2nd place.

Joaquin Niemann is presently dating an architect, Christina Hellema Puga. Though we are yet to get more information about the couple’s love story. Joaquin has amassed a good number of followers on Instagram. His official Instagram account, joaco_niemann, currently has 124K followers.

Collin Morikawa Net Worth: How Rich is the Golfer Actually?