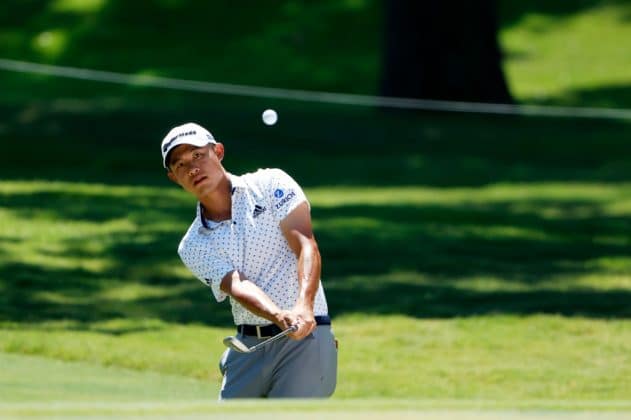 Collin Morikawa is an American golfer who plays on the PGA Tour. He is best known for winning the 2020 PGA Championship. As of 2022, Collin Morikawa net worth is estimated to be $8 million.

Born on February 5, 1997, in Los Angeles, California, Morikawa started playing golf while he was at La Canada High School in California. He then went on to play collegiate golf at the University of California, Berkeley.

During his time at the University of California, he won the 2019 Pac-12 Championship. He ended his amateur career on a high note winning the Western Junior, Trans-Mississippi Amateur, Sunnehanna Amateur, and the Northeast Amateur.

Morikawa was also on the winning Arnold Palmer Cup team in 2017 and 2018. His illustrious amateur career made him one of the top-ranked golfers. He graduated in 2019 with a degree in business administration.

Morikawa’s professional golfing career started at the 2019 RBC Canadian Open, where he tied for 14th place. He tied for 2nd at the 3M Open followed by 4th at John Deere Classic. With that finish, he qualified for the PGA Tour membership for the 2019-20 season.

You May Also Like:   Robert MacIntyre Net Worth: How Rich is the Scottish Golfer?

He won his first PGA Tour event at the Barracuda Championship beating Troy Merritt by three points. On June 14, 2020, he tied for the lead of the 2020 Charles Schwab Challenge after 72 holes. A couple of weeks later, he beat Justin Thomas in a playoff to win his second PGA Tour title at the Workday Charity Open.

Morikawa’s big moment came on August 9, 2020, when he won the 2020 PGA Championship to win a major in only his second major start. With that win, he became the third-youngest golfer to win the PGA Championship.

Collin is in a relationship with Katherine Zhu. She is an amateur golfer who earned the WGCA All-American Scholar and WCC All-Academic honors. Zhu has a total of 16 junior tournament wins including the 2013 SCPGA Jack Kramer Memorial, the Guangdong Junior Series, the 2013 FCG Collegiate Series, and the 2013 Jack Nicklaus Junior Championship.

Morikawa and Katherine have been together for over 5 years. They are soon going to tie the knot.

What is Collin Morikawa Net Worth Actually?

As of 2022, Collin Morikawa’s personal fortune is estimated to be around $8 million. He earned $1.98 million winning the PGA Championship. According to his official stats on PGA Tour, he has earned more than $6,898,977 during his career.

He also earns from several sponsorships from several brands. There is no doubt that his earnings will multiply in the coming years.

Will Zalatoris Net Worth: How Rich is the Golfer Actually in 2022?

Joaquin Niemann Net Worth: How Rich is the Chilean Golfer?