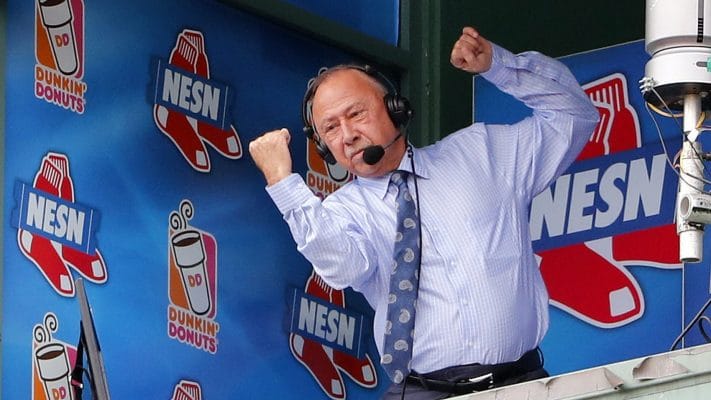 Gerald Peter Remy, better known as Jerry Remy was an American sportscaster and retired professional baseball player. Remy has played as a second baseman for 10 seasons in the Major League Baseball (MLB). He played with California Angels for 3 years and Boston Red Sox for 7 years. Jerry Remy died at 68 years of age after a long battle with lung cancer on October 30, 2021. Jerry Remy net worth at the time of his death is reported to be around $15 million.

Jerry Remy was born Gerald Peter Remy on the 8th of November, 1952 in Fall River, Massachusetts, United States. He spent his childhood days growing up in nearby Somerset. For his study, he joined Somerset High School. Following high school graduation, he studied at Roger Williams University.

In 1971, he started playing in the minor leagues. In fact, he played 4 seasons in the Angels’ farm system. He appeared in 421 games in Minor League Baseball where he scored 12 home runs, and 152 RBIs with a batting average of .275. In 1975, he entered into the major league and played his first game with the California Angels on April 7, 1975. He appeared in 147 games as the second batsman for the California Angels where his batting average was .258.

You May Also Like:   Tommy Fury Net Worth: How Rich is the Boxer

Jerry found a new pathway after his post-playing career. He started sports broadcasting for the New England Sports Network (NESN). He was working as the regular color commentator for the network’s Red Sox broadcasts. Remy teamed up with the play-by-play announcer, Don Orsillo from the 2001 to 2015 season. The duo also won 4 New England Emmy Awards. From the start of the 2016 season, he was teamed up with the new play-by-play announcer, Dave O’Brien.

Jerry Remy was married to Phoebe Remy. He tied the knot with his wife, Phoebe in 1974. Together, they share three kids named Jared, Jordan, and Jenna. His eldest son, Jared was arrested on August 16, 2013, on a charge of fatally stabbing his girlfriend, Jennifer Martel. On May 27, 2014, he pleaded guilty to the charge and received life imprisonment without a possibility of parole.

You May Also Like:   Clay Matthews Net Worth: How Rich is the Packers Linebacker?

Likewise, his youngest son, Jordan tried to follow his career path by getting into a professional baseball team. However,  he didn’t play baseball professionally although he was drafted in the 1999 MLB draft by the Red Sox.

Jerry Remy died at the age of 68 on Sunday night, October 30, 2021, after a lengthy battle with lung cancer. He went through surgery in November 2008 to remove a small low-grade cancerous area from his lung. After he recovered from the surgery, he had an infection in the lungs and later suffered from pneumonia. In June 2017, he announced that his lung cancer came back. On August 7, 2018, he made the announcement of his fourth diagnosis of cancer. In early November 2018, he announced that he has become cancer-free.

Henry Ruggs Net Worth: How Rich is the Raiders Wide Receiver?

Cooper Rush Net Worth: How Rich is Cowboys Quarterback Actually?