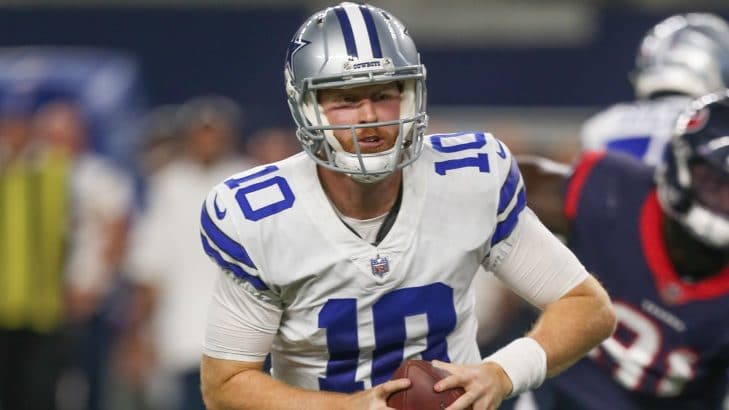 Cooper Rush is a 28 years old American football quarterback. He is best known for playing in the National Football League for the Dallas Cowboys. Cooper was picked up by the Dallas Cowboys as an undrafted free agent in 2017. He got his first start as a starter for the Cowboys against Minnesota Vikings on October 31, 2021. As of 2022, Cooper Rush net worth is estimated to be around $4 million.

Cooper Rush was born on the 21st of November, 1993 in Charlotte, Michigan, United States. He was born to his parents, Matthew and Frances Rush. For his study, he joined the Lansing Catholic High School. He was a three-year starter at quarterback for his high school football team. He shined as a quarterback throughout his high school days, where he led his team to get back-to-back victory in regular seasons in 2010 and 2011.

You May Also Like:   Corey Conners Net Worth: How Rich is the Canadian Golfer Actually?

Rush continued to show brilliant game after he became a four-year starter at Central Michigan University. He joined Central Michigan University after receiving only a football scholarship offer. As he entered a sophomore year, along with University’s football team, he made it into the 2014 Bahamas Bowl. At the end of the post-season college football game, he set all-time record for all bowl games with seven touchdown passes.

In 2015, he had his best season as a junior. In the first 13 games, he scored 3,703 passing yards which became a new school single-season record. Rush also completed 66.3% of his passes for 3848 passing yards, 25 touchdowns, and 11 interceptions. As he entered into a senior year, he had a low completion percentage of 59.8%. His production also dropped down to 3540 passing yards and 23 touchdowns. At the end of his college career, he had 12,894 passing yards and 90 touchdowns.

You May Also Like:   Travis Rudolph Net Worth: How Rich is the Former NFL Player?

On January 4, 2021, Rush signed a future contract with the Dallas Cowboys. Cooper recently played as a starter for the Cowboys against the Minnesota Vikings, where he helped the team to win with a score of 20-16 with 2 touchdowns.

Cooper Rush is married to a lady named Lauryn Rush. There is not much detail available on his marriage. Cooper shares a daughter with his better half, Lauryn.

As of 2022, Cooper Rush’s personal wealth is estimated to be around $4 million. He has earned total earnings of $4,944,529 from his professional football career so far.

Jerry Remy Net Worth: How Rich was the Broadcaster Actually?

Emmitt Smith Net Worth: How Rich is the Former NFL Player Actually?