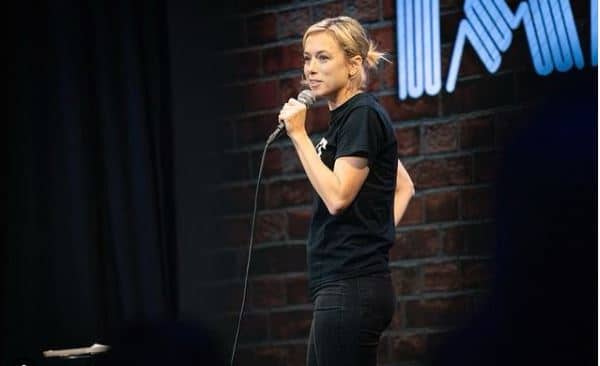 Iliza Shlesinger recently starred on Netflix’s romantic comedy movie “Good on Paper”, which was released on June 23, 2021. The movie explains the insane true story about her past romantic life.

Iliza Shlesinger was born on 22nd February 1983 in New York City, United States. She spent her childhood days growing up in Dallas, Texas. For her study, she joined the private Greenhill School based in Addison, Texas. She was a part of the improvisation team while attending the private school. Later on, she joined the University of Kansas, and Emerson College, where she majored in film.

Shlesinger got to know about her comedy skills when she joined the comedy sketch groups of Emerson College. She decided to shift her place to Los Angeles after completing her graduation. In Los Angeles, she became a member of the Whiteboy Comedy group of standup comedians. She was in fact one of the most popular members of the comedy group.

Iliza became the winner of the contest, So You Think You’re Funny in 2007. After a year, she competed on NBC’s comedy show “Last Comic Standing”. She eventually came out as the youngest, and the first lady winner of the show. Iliza came up with an on-demand comedy video called ‘Man Up and Act Like a Lady” in 2010. That same year, she released an on-demand comedy album “iliza LIVE”.

Shlesinger has also been quite impressive as a TV show host. In July 2007, she started hosting TheStream.tv’s show “The Weekly News”. She hosted the show until April 2012. She has also hosted the reality-based dating series “Excused” for two years from 2011 to 2013. In August 2014, she started a new podcast titled “Truth and Iliza”.

Iliza is most recently getting attention for her Netflix movie “Good on Paper”. The romantic comedy movie was released on June 23, 2021, on Netflix. Shlesinger revealed that two-thirds script of the movie is based on the true story she experienced with her ex-boyfriend, with whom, she was in a relationship in her early 30s.

Iliza Schlesinger is married to a chef, Noah Galuten. She shared the wedding vows with hubby Noah on May 12, 2018, in a Jewish ceremony. A few years back, she was in a relationship with some guy, whom she met on the plane. Iliza has described her past love affair on the Netflix movie, Good on Paper.

She revealed that the man who came into her life a few years back lied everything about him. After she came to know the truth about him, she was all broken, and she started having a doubt on the truthfulness of every person around her. Iliza has preferred to call the movie rom-con rather than a rom-com (Romantic Comedy).

Tabitha Brown Net Worth: How Rich is the Actress Actually?

La La Anthony Net Worth: How Rich is the Actress Actually in 2022?