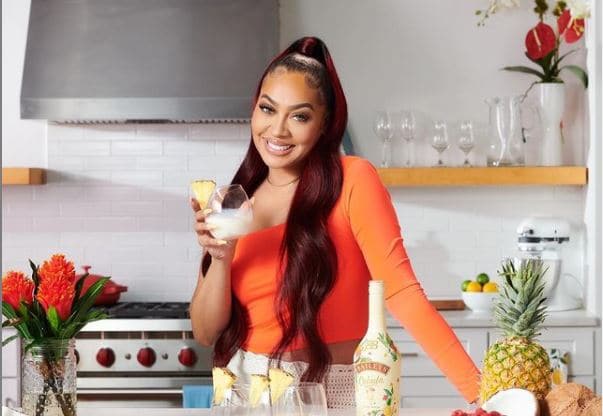 Alani Nicole, better known as La La Anthony is an American TV personality, actress, author, and businesswoman. She is best known as the former host of VH1’s reality TV shows “Flavor of Love”, “Real Chance of Love”, and “For the love of Ray J”. As of 2022, La La Anthony net worth is estimated to be around $30 million.

La La Anthony has recently filed for divorce from NBA star, Carmelo Anthony on Thursday, June 17, 2021. She has decided to end her 11 years long marriage with Carmelo, giving the reason as irreconcilable differences.

La La Anthony was born on 25th June 1981 in New York City, New York, United States. She was raised by parents, who belong to Puerto Rican heritage. La La has two younger sisters and a younger brother. From the beginning, she has taken part in many activities. Though, music has always been her first priority. For her study, she attended Howard University to study communications. However, she didn’t complete her University study.

La La has hosted many TV shows for MTV, which made her popular as a host. She is mostly noticed as a host of the TV shows “Flavor of Love”, “I Love New York”, “Real Chance of Love”, “For the Love of Ray J 2”, and “Charm School with Ricki Lake”.

After two years of serving at MTV, she launched her own production company called “Krossover Productions” in 2003. Soon, she began working as a producer on Mike Tyson’s documentary “Tyson”. The documentary received the Regard Knockout Award in France. Moreover, it was included in the 2009 Cannes Film Festival. In addition to that, she has worked as a producer along with director/producer, Brett Ratner for a featured film.

La La has also worked as an actress in several movies like “Two Can Play That Game”, “Think Like a Man”, and “Baggage Claim”. Likewise, she has shown up in the TV series “NYC 22”, and “Single Ladies”.She has also shown her impressive acting skill in the off-Broadway production “Love Loss and What I Wore”.

La La Anthony was married to basketball player, Carmelo Anthony. She got engaged to Carmelo on Christmas Day 2004. Their wedding ceremony took place at Cipriani’s in New York on July 10, 2010. In fact, their ceremony was filmed by VH1, and aired on the network as a part of the reality series titled “La La’s Full Court Wedding”. The pair is blessed with their first son, Kiyan Carmelo Anthony on March 7, 2007.

La La has recently decided to call off her 11 years of married life with Carmelo. She has earlier parted ways with an NBA star in 2017 after a rumor surfaced that he cheated on her, and he is parenting a kid outside of their marriage. In 2019, La La was reported to be ending her marriage with Carmelo after rumors of her infidelity started circulated all around the place.

You May Also Like:   Kristin Chenoweth Net Worth: How Rich is the Actress Actually?

As of 2022, La La Anthony’s personal wealth is estimated to be around $30 million. Besides earning a hefty sum from her TV show appearances, she is also making a lot of money from her entrepreneurial venture.

She launched her own cosmetic line, “MOTIVES by La La” in 2012, and clothing line, “La La Anthony Collection” in October 2019. On the other hand, her former partner, Carmelo Anthony holds a gigantic net worth of $60 million.

Iliza Shlesinger Net Worth: How Rich is the Comedian Actually?