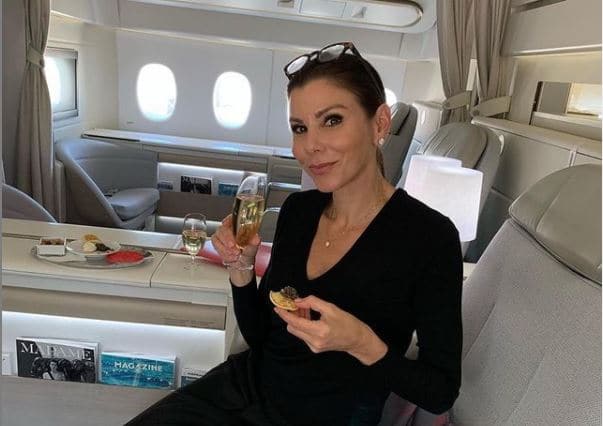 Heather Dubrow is an American actress and reality TV personality. She is best known for appearing as Lydia DeLucca in the comedy-drama TV series “That’s Life”. Heather is also known for showing up on Bravo TV’s reality series “The Real Housewives of Orange County”. As of 2022, Heather Dubrow net worth is estimated to be roughly $50 million.

Heather has recently confirmed her re-entry on the reality series for the 16th season alongside current housewives Shannon Beador, Emily Simpson, and Gina Kirschenheiter.

Heather Dubrow was born on 5th January 1969 in The Bronx, New York City, United States. She spent her childhood days growing up in Chappaqua, New York. Heather is a 5th generation American of Jewish ancestry. Regarding her education, she has studied at Syracuse University, from where she received a BFA degree in 1990.

Heather started her acting journey in 1994 by playing the role of Cherise in the TV sitcom “Married… with Children”. In 1996, she started showing up as Kate in the TV series “Life with Roger”. she appeared for five episodes in the series for a year. Then she continued her acting journey by appearing in other TV series like “Men Behaving Badly”, “Jenny”, “Early Edition”, and “Stark Raving Mad”.

You May Also Like:   Court Westcott Net Worth: How Rich is Kameron Westcott Husband?

She got her big break in 2000 when she started appearing as Lydia DeLucca in the crime drama series “That’s Life”. Heather received early recognition from the show, where she appeared for two years from 2000 to 2002. Following then, she has appeared in various other TV projects like “The First $20 Million Is Always the Hardest”, “Now You Know”, “Surviving Suburbia”, “Chelsea Lately”, and “Marie”.

Heather became a part of Bravo TV’s reality show “The Real Housewives of Orange County” in 2016. She received immense popularity from the reality show for four years, where she appeared from season 7 to season 11. In between, she has continued to appear on some other TV shows like “Malibu County”, “Hot in Cleveland”, “Hawaii Five-0”, “Good Day L. A.”, “Sequestered”, “Botched: Post Op”, and “Young & Hungry”.

Heather will be rejoining the reality series for its 16th season. The news of her rejoining the reality show started circulating all around after the exit of Kelly Dodd, Bruanwyn Windham-Burke, and Elizabeth Lyn Vargas. Heather seems all excited for her re-entry on the show, as she is looking forward to showcasing her family in the show. She also mentioned that her family has been the major factor in her decision to re-join the show.

Heather Dubrow is married to a plastic surgeon, Terry Dubrow. She tied the knot with Terry in 1999. Heather has been blessed with four kids from her conjugal life. Among her four kids; two are twins; Nicholas and Maximillian. She is currently spending happy family life residing in Orange County, California.

You May Also Like:   Darci Lynne Net Worth: How Rich is the Ventriloquist Actually in 2022?

As of 2022, Heather Dubrow’s personal wealth is estimated to be a whopping $50 million. She has inherited a big amount of her net worth from her husband, Terry Dubrow. Besides that, she has also earned a considerable amount from her TV show appearances. Heather also hosts her own podcast called “Heather Dubrow’s World”.

Tom Sandoval Net Worth: How Rich is the Vanderpump Rules Star?