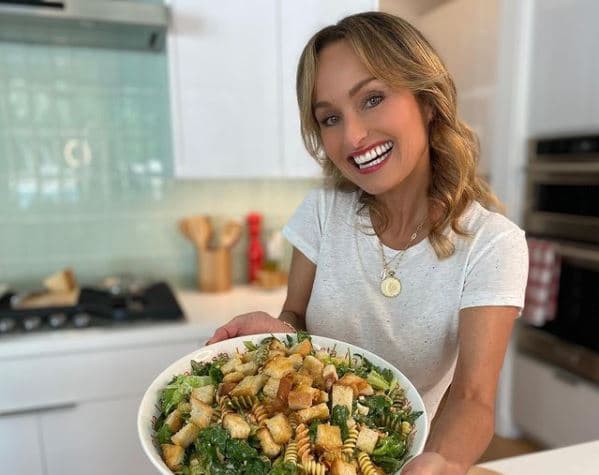 Giada De Laurentiis is an Italian-American chef, TV personality, and writer. She is best known for the different food shows that she does such as Giada at Home and Everyday Italian. As of 2022, Giada De Laurentiis net worth is estimated to be around $35 million.

Giada was born on August 22, 1970, in Rome, Italy. She is the daughter of actor Alex De Benedetti and actress Veronica De Laurentiis.

Since her parent’s divorced when she was still young, Giada and her siblings would move to Southern California. She then studied at the Marymount High School and would attend the University of California for her further studies from where she graduated with a degree in 1996 in social anthropology.

Giada would later go to Paris where she studied at the Le Cordon Bleu and became a pastry chef. She had found her passion and after returning to the U.S. would start working as a chef in restaurants such as Spago. Giada had written a piece in Food & Wine which would be picked up by the Food Network with whom she would eventually start the show called Everyday Italian in 2003.

Her Italian background along with ties to the U.S. made her a unique individual who was perfect for this show. However, the initial days in the show were not the easiest for her. There were times when fans accused the network of hiring a model rather than an actual chef. But, her fans started to grow more than her haters because of which the show also gradually got more and more popular.

In 2005, she would then start to be the host of the show called Behind the Bash where Giada would look through the catering process that goes behind mega-events. As Giada started to become more of a personal brand, she would be the host of the show called Giada’s Weekend Getaways where she travels to different places across the U.S. and tries the different culinary cuisines in those places. She also has other ventures including a restaurant named GIADA.

Giada married a fashion designer named Todd Thompson in 2003 and together they also shared a child who would be named Jade Marie De Laurentiis-Thompson. However, in 2015, it was made public that the couple had split up. Since then, Giada has been in a relationship with a TV producer named Shane Farley.

As of 2022, Giada De Laurentiis has an estimated net worth of $35 million. The huge number of viewers in her shows has led to Giada being able to generate significant cash from her work and love for cuisines.

Furthermore, her restaurant ventures have also aided in increasing her net worth. She even bought a home in 2016 for $6.9 million in Los Angeles and would buy another home in the same region for $4.8 million in 2019.

You May Also Like:   Alison Victoria Net Worth: Height, Age, Bio, Husband & Career

Camille Grammer Net Worth: How Rich is RHOBH Star Actually?