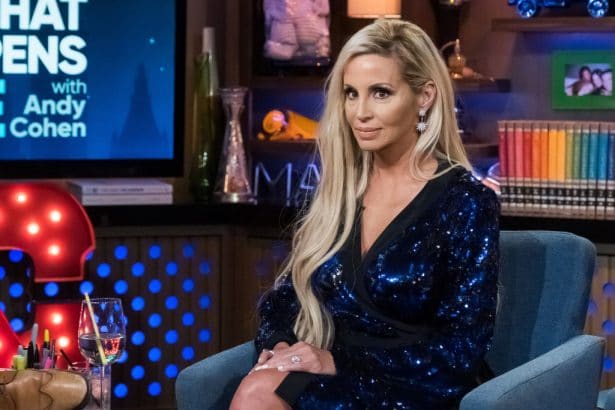 Camille Grammer is an American TV personality, model, dancer, producer, and actress. She is best known for starring in Bravo’s reality TV series “The Real Housewives of Beverly Hills”. Camille is probably best known as the ex-wife of the actor, and producer, Kelsey Grammer. As of 2022, Camille Grammer net worth is estimated to be around $50 million.

Camille Grammer was born on the 2nd of September, 1968 in Newport Beach, United States. She has spent her childhood days growing up in Cedar Grove, New Jersey. Regarding her education detail, she has attended Montclair State College, where she studied English literature. Then, she joined the UCLA School of Theater, Film, and Television based in Los Angeles.

Camille began her career as a dancer in the 1980s, where she worked on the TV show called “Club MTV”. In the TV show, she performed at the Tavern on the Green along with a dance group. Then, she appeared as a model in many music videos. She started working as a model in the 1990s, where she modeled for several Playboy publications.

You May Also Like:   Steve Ross Net Worth: How Rich is the Painter Actually in 2022?

Camille became a popular TV personality after she appeared in Bravo TV’s reality show “The Real Housewives of Beverly Hills” in 2010. On January 13, 2011, she revealed that her then-husband, Kelsey, wanted to leave their marriage. The episode became the Number 1 telecast among adults aged from 18 to 49 against all cable competition that was telecast in the same time slot. It was also the highest-rated episode of that season.

Camille made a comeback as an actress in 2011 by guest-starring on the CBS sitcom “$#*! My Dad Says”. She portrayed the role of a recently-divorced reality star in the series. Camille announced in March 2012 that she would not be returning for the 3rd season of “The Real Housewives of Beverly Hills”.

Camille confirmed that she would not be returning to the show as a full-time cast member after two months in May 2012 while making an appearance at the Race to Erase MS gala. Though, she has been making semi-regular guest appearances in the reality show.

Camille Grammer has been married twice. First, she tied the knot with the actor, Kelsey Grammer in 1997. She shares two kids, a son named Jude Gordon, and a daughter, Mason Olivia. Both of her kids were born through a surrogate mother. She filed a divorce with him in July 2010 seeking physical custody of her both kids. She also demanded child support and alimony.

Camille and Kelsey’s divorce was officially finalized on 10th February 2011. Then, she dated lawyer and fitness trainer, Dimitri Charalambopoulos. In 2013, she filed a domestic violence case against Dimitri. She had minor injuries in the domestic violence so no charges were filed against her then-boyfriend. However, later Harris County, Texas District attorney charged him with a felony and assault of a family member.

Camille married for the second time David C. Meyer on 20th October 2018 in Hawaii. She seems to be living a blissful moment with her second husband since we have not heard any unusual things about her second marriage.

As of 2022, Camille Grammer’s personal wealth is estimated to be around $50 million. According to sources, she received a huge amount of around $30 to $50 million as a settlement amount from her ex-husband, Kelsey Grammer. In addition to a big amount, she also receives cash and property from Kelsey.

Giada De Laurentiis Net Worth: How Rich is the Chef Actually?

Charles Payne Net Worth: How Rich is Fox Business Contributor?