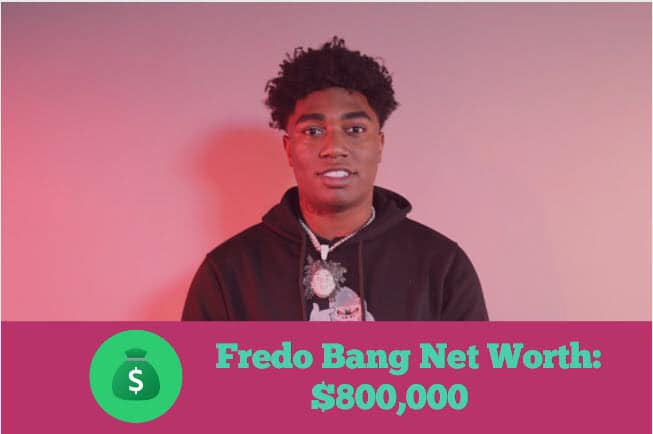 Fredrick Dewon Thomas Givens II known by his stage name as Fredo Bang is an American rapper from Louisiana. He is best known for his tracks like “Oouuh” and “Shootas on the Roof”. As of 2022, Fredo Bang net worth is estimated to be $1 million.

Givens II was born on March 29, 1996, in Baton Rouge, Louisiana. He has 5 half brothers and 3 half-sisters in his family and his parents separated when he was just one year old. He spent most of his childhood with his mother. Givens went to high school but dropped out of school after he was arrested for second-degree battery.

Fredo Bang started rapping while he was at elementary school. He met Gee Money there and they became good friends and started rapping together. He started to take music seriously in the latter half of 2014. His early works like “Rainy Days” and “I-Phone 6 were in collaboration with Gee Money.

His first hit “Thuggin” came in June 2016 and was a massive hit across several music streaming sites. In October 2018, he released his debut mixtape and it includes songs like “Bangville”, “Father”, “Status”, and “Shootas On The Roof”. His hit song “Oouuh” was also included in that mixtape.

In 2018, he also released other singles like “Slide”, “Die Na”, and “Envy” with guest rappers like Marley G and Blvd Quick.

Fredo Bang was also featured on Moneybagg Yo’s track “Spin On Em”. In April 2020, he released his debut album titled “Most Hated”. It peaked at number 110 on the Billboard 200.

He has been involved in several legal issues. In January 2016, he was arrested on charges of attempted second-degree murder. He spent 2 years behind the bars and was released in 2018.

A post shared by “Still Most Hated” Out NOW🦍🥀 (@fredobang)

The rapper from Louisiana stands at a height of 5 feet 10 inches or 178 cm tall and weighs approximately 75 kg or 165 pounds. His body stats like chest, arms, and waist size are not available at the moment. Likewise, his hair color and eye color are both black.

As of 2022, Fredo Bang net worth is estimated to be $1 million. Live performances, album sales, and earnings from streaming sites have contributed massively to his wealth. He is currently signed to Def Jam Recordings.

Quando Rondo Net Worth: How Rich is the Rapper Actually?