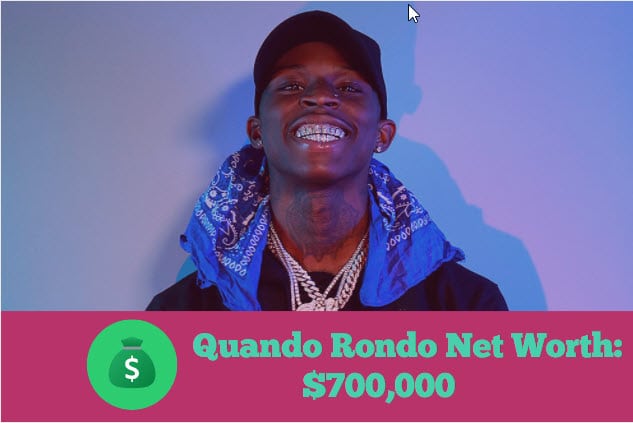 Tyquian Terrell Bowman known by his rap moniker as Quando Rondo is an American singer, songwriter, and rapper. He is best known for his single “I Remember” ft Lil Baby which garnered millions on plays. As of 2022, Quando Rondo net worth is estimated to be around $1 million.

Terrell Bowman was born on March 23, 1999, in Savannah, Georgia. He grew up in a neighborhood with crime and gang activities. From an early age, he was in trouble with the law. He spent some time in juvenile detention centers. He started rapping when he was a child but took it seriously while he was at the juvenile center. Rondo was released in October 2017, and at that time, he decided to pursue his career in music.

Growing up Quando Rondo listened to artists like Chief Keef, Collective Soul, and Fatboy Slim. In January 2018, he released the song “I Remember” featuring Lil Baby. After that, he released a couple of songs titled “Motivation” and “Paradise”. All of these three songs got millions of views on YouTube.

Rondo released his first mixtape “Life B4 Fame” featuring artists like Lil Baby, Lil Durk, and OMP Peezy. The album consisted of the song “ABG” which garnered more than 1 million streams on MyMixtapez in its first two days of release.

Rondo’s fame even rose further after he signed to YoungBoy Never Broke Again’s Atlantic Records imprint, Never Broke Again, LLC. After a couple of months, he was featured on three of four tracks of NBA YoungBoy’s ‘4Loyalty’ EP.

His second mixtape titled “Life After Fame” was released on September 24, 2018, and featured guests like NBA YoungBoy, Rich Homie Quan, and Boosie Badazz. In February 2019, he released a hit single “Scarred From Love” which appeared on his third mixtape “From the Neighborhood to the Stage”. On January 10, 2020, he released his debut studio album “QPac”. The album featured vocals from rappers like 2Chainz, A Boogie wit da Hoodie, Lil Durk, Luh Kel, and Polo G. It debuted at number 22 on the Billboard 200 in the United States.

Rondo has been involved in several controversies. One of those includes his beef with rapper King Von. On November 6, 2020, members of King Von and Quando Rondo had an altercation, leading to a shoot-out that resulted in the death of King Von. The video footage of that fight showed Von throwing punches at Quando Rondo’s member prior to the gunfight. Rondo and his crews claimed that they were acting in self-defense and Von was the aggressor.