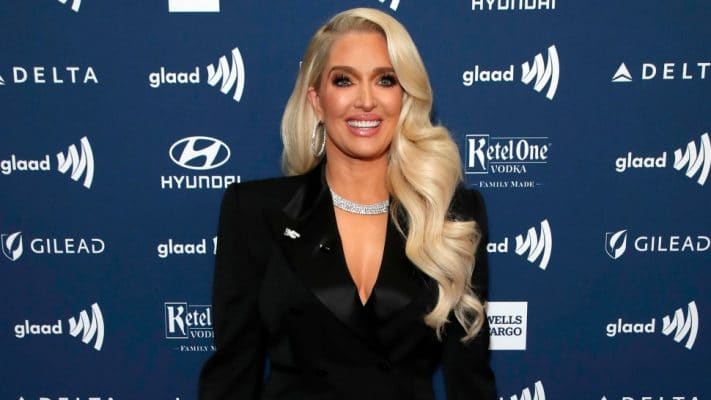 Erika Jayne is an American singer, actress, and reality TV personality. She is best known for being a cast member on the E! reality series “The Real Housewives of Beverly Hills”. As of 2022, Erika Jayne net worth is estimated to be roughly $6 million.

Erika and her ex-husband, Tom Girardi’s legal troubles were recently presented in an ABC News Original documentary, “The Housewife and the Hustler”.

Erika Girardi Jayne was born Erika Chahoy on 10th July 1971 in Atlanta, Georgia, United States. She was raised by a single mother, Renee Chahoy. Erika’s parents separated before her first birthday. Regarding her education, she received her high school degree from North Atlanta High School. She shifted her place to New York City after she turned 18.

Erika has earlier worked at a bar and restaurant based in Beverly Hills named Chasen’s. Later, she started off her career as an actress, where she made her first on-screen appearances in NBC’s legal drama series “Law & Order”. She showed up as Suzanne Morton in an episode, Prescription for Death. Later on, she carried on her acting work, and appeared in several movies like “Alchemy”, and “Lowball”.

You May Also Like:   Dorit Kemsley Net Worth: How Rich is RHOBH Star Actually in 2022?

Erika has also been known for her singing talent. She came up with her first song titled “Roller Coaster” on January 1, 2007. The song was a big hit, which peaked at the first spot on the Billboard Hot Dance Club Play chart. Later on, she received further recognition as a singer from the songs “Give You Everything”, and “PAINKILLR”. Erika released her first album titled “Pretty Mess” on August 11, 2009.

Jayne received widespread recognition after she appeared as a cast member on the sixth season of the E! reality series “The Real Housewives of Beverly Hills”. The reality series was premiered in 2015.

Erika Jayne has married twice in her life. She first tied the knot with the guy named Thomas Zizzo, whom she met while living in New York. She married Thomas Zizzo in December 1991 at St. Patrick’s Cathedral. Erika also became a mother of a son whom she named Thomas Zizzo, Jr. After living together for few years, they separated with a divorce. Following that, she moved to Los Angeles.

Erika then married to former attorney, Thomas Girardi in January 2000. The couple lived together for twenty years, before announcing separation in November 2020. Soon after a month of the announcement, they fell into controversy, after few media outlets claimed their divorce as a sham to hide their assets. They further fell into a lawsuit after accused to be involved in embezzlement of funds that meant for the families of the victims, who died in the 2018 Lion Air plane crash.

Recently, on June 14, 2021, their legal troubles were presented on ABC’s documentary titled “The Housewife and the Hustler”. The documentary was released on the American subscription video, Hulu.

As of 2022, Erika Jayne’s personal wealth is estimated to be around $6 million. However, the legal issues with her ex-hubby, Tom would surely have a big impact on her current net worth value. In December 2020, Jayne was reportedly made stopped selling her designer clothing online during an effort to recover $2 million. She also owned a $10 million worth of estate in Pasadena along with Tom Girardi, which was listed for sale in May 2021 for $13 million.