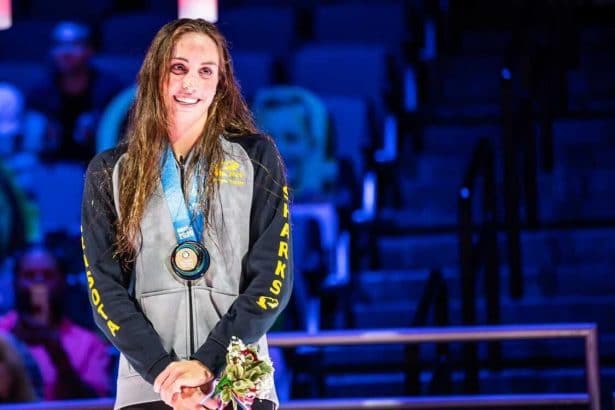 Emma Weyant is an American competitive swimmer. She is a former US national champion in the individual medley. After qualifying for the 2020 Olympic Games for the 400-meter individual medley, she would win the silver medal during the event.  As of 2022, Emma Weyant has an estimated net worth of $70,000.

Emma Weyant grew up in a place called Sarasota and has been a swimmer for the Sarasota Sharks. She studied at the Riverview High School and after her graduation, she would make the verbal commitment to go to the University of Virginia on April 28, 2019, and will be graduating in 2024. This is because she had deferred her enrollment until the 2021-22 session because of her busy schedule.

Emma Weyant Net Worth and Career

Emma is coached by Brent Arckey for the Sarasota Sharks. In her international career, Emma managed to win gold during the 400-meter individual medley during the 2018 JR Pan Pacific Championship which was held in Fiji. Then in the Summer Nationals held in 2019 in Palo Alto, Emma managed to win the 400 IM and also won during the free B-final there. Her journey to the Olympics in 2021 would also be full of surprises as she was the underdog who defied the odds by qualifying for the Olympic team during the 2021 Olympic Trials in the U.S.

You May Also Like:   Jason Kokrak Net Worth: How Rich is the Golfer Actually in 2022?

She has been ranked at number 11 in the class of 2020 for SwimSwam’s Top 20 NCAA recruits list. Her silver medal victory at the 2020 Tokyo Olympics has ensured the 17-year-old streak of American women winning a medal at the 400 meters individual medley at the Olympics. Though she could not beat the Japanese swimmer Yui Ohashi who would win the gold medal, this experience will surely motivate Emma to bring the gold medal back to the U.S. at the next Olympics.

Emma has already proven her competency at the 400 Individual Medley having been ranked as number 1 for the same for the 18 & Under World 100 ranking. During her career, she has already become a member of the National Honor Society and has even been named in the Scholastic All-American. Furthermore, she is also a four-time scholar-athlete.

Emma Weyant currently stands at a height of 5 feet 9 inches or 175 cm tall and weighs around 52 kg or 115 pounds. Her body measurements are not available at the moment. Likewise, she has brown hair and a pair of dark brown eyes.

Her parent’s names are James Weyant and Kristi Cardoni-Weyant. Emma also has three siblings whose names are Harper, Gracie, and Ava. She has not disclosed any information regarding if she is in a relationship and is probably single with her full focus being on her career as a swimmer right now.

You May Also Like:   Corey Conners Net Worth: How Rich is the Canadian Golfer Actually?

As of 2022, Emma Weyant has an estimated net worth of $70,000. Emma’s career is still only starting out and with her recent silver medal victory during the 400 meters individual medley at the Tokyo 2020 Olympics, her net worth might rise significantly in the future by receiving sponsorship deals.

Phil Dalhausser Net Worth: How Rich is the Volleyball Player Actually?

Jagger Eaton Net Worth: How Rich is the Skateboarder Actually?