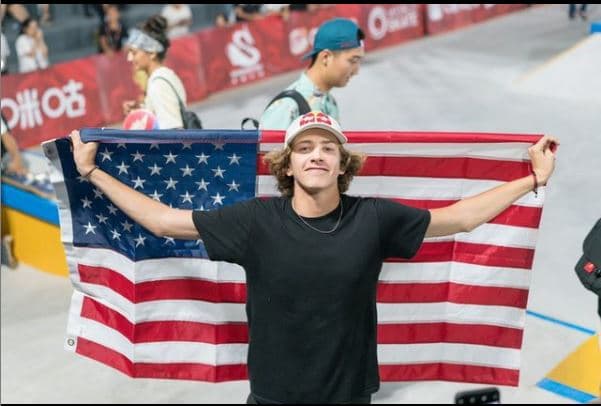 Jagger Eaton is an American professional skateboarder who was previously the youngest skateboarder to ever compete at the X Games. As of 2022, Jagger Eaton net worth is estimated to be around $500,000.

Jagger Eaton along with his senior brother Jett was raised by Geoff Eaton who owns the Kids That Rip (KTR) Skateboard School. With their father being the owner of a school that specializes in training kids to compete as skateboarders, Jagger started being involved with skateboards when he was only four years old.

It was at this age that he was given a skateboard by his father during Christmas along with a mini-ramp in their garage where they could practice. This along with their father’s skateboard school led to Jagger and his brother getting first-class training from a young age. Growing up, Jagger looked up to stars such as Colin McKay and Danny Way as role models.

Jagger Eaton Net Worth and Career

Time spent at his father’s skate ramp made Jagger better and better while also developing a big passion for skateboarding. At this young age, he already knew what he wanted to do for the rest of his life. Jagger competed at the 2012 X Games which was held in Los Angeles when he was only 11 years old. This wrote his name in history by becoming the youngest ever X Games competitor breaking the previously held record by Nyjah Huston. He held the record for 7 years until it was broken by a 10 year old named Gui Khury.

You May Also Like:   Antonio Dennard Net Worth: How Rich was the NFL Player?

Yet, he formed many more records in his early teenage years as a skateboarder. Jagger won the Tampa Am held in 2014 in Tampa making him one of the youngest to ever win a competition of that level. The very next year, Jagger went on to win the BoardrAm that was held in Texas. He even went on to compete in the BoardrAm finals because of this win. Jagger has been sponsored by DC Shoes for close to a decade now along with his brother.

Some of his other sponsors include Red Bull, Bones Wheels, and Independent Truck Company. Jagger is now all set to represent the U.S.A. along with Alana Smith in the inaugural Olympic skateboarding competition. This is a big moment for Jagger as going to the Olympics has been a legacy that was started by his grandfather Stormy Eaton. With Jagger qualifying in June of 2021 through the Olympic Street Team, he is all set to give what could be the most important performance of his career.

Jagger Eaton has been in a relationship with Morgan Justus who is a model and a musician who also has a Youtube channel. The two have been together since 2018.

As of 2022, Jagger Eaton has an estimated net worth of $500,000. He earns a vast chunk of money from sponsorships and endorsements including from brands like Red Bull, Bones Wheels, and Independent Truck Company.

Sunisa Lee Net Worth: How Rich is the Gymnast Actually in 2022?