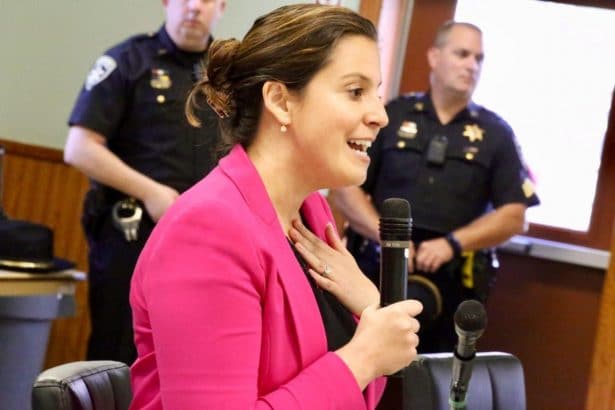 Elise Stefanik is an American politician, who currently serves as U. S. Representative for New York’s 21st congressional district. She is the youngest woman who was elected in the first House election to Congress in 2014. As of 2022, Elise Stefanik net worth is summed up to be around $1.5 million.

Elise is a strong supporter of a former president, Donald Trump. She would succeed Trump critic, Liz Cheney in GOP leadership as Republic Conference Chairwoman.

Elise Stefanik was born on the 2nd of July, 1984 in Albany, New York, United States. She was born to parents, Ken and Melanie Stefanik. Elise’s parents had their own wholesale plywood distributing business, Premium Plywood Products. She initially studied at Albany Academy for Girls. Later, she attended Harvard College, where, she earned a degree in Government.

Following graduation, she started working at the administration for U. S. 43rd President, George W. Bush. There, she worked as a staff for the Domestic Policy Council. Then, she served for Joshua Bolten, who was Bush’s 2nd deputy chief of staff. Her early experience also includes as a director of the presidential exploratory committee of Tim Pawlenty.

During the 2012 Presidential election, she looked after the debate preparation for the Wisconsin congressman, Paul Ryan. However, she returned back to New York, after Romney and Ryan faced a defeat in the 2012 presidential election. Stefanik named herself as one of the candidates in the U. S. House of Representatives for the 2014 election.

You May Also Like:   Lauren Boebert Net Worth: How Rich is the Congresswoman Actually?

She stood in the election for New York’s 21st congressional district. Stefanik became the youngest woman for getting elected to Congress, after defeating the strong opponents from Democratic Party, Aaron Woolf, and Green Party nominee, Matt Funiciello. In 2016, she competed for the re-election and defeated strong candidates, Mike Derrick and Matt Funiciello in the general election. Elise again stood for the re-election in 2017, where she received a 56.1 % vote.

Likewise, she was called for a rematch by Tedra Cobb in the general election, where she defeated him getting a 58.83% vote. Stefanik has been a strong supporter of former President, Donald Trump. After Trump faced a defeat in the 2020 Presidential election, Trump was not accepting the defeat, as he was making false claims of fraud. Trump even tried to overturn election results.

Stefanik also supported Trump’s allegations claiming that Joe Biden received over 140,000 votes from the underage and deceased people. She further alleged that Biden has earned votes from other unauthorized voters from Fulton County, Georgia.

Elise is currently making her way near as a new Republican Conference chairwoman. She would be succeeding Liz Cheney, who has been against Trump’s Big Lie on his false allegation on the 2020 Presidential election. The GOP has clearly made a decision to reject Liz Cheney and elevate Stefanik. It makes clear that Trump is still heading the Democratic Party.

Elise Stefanik is married to Matthew Manda. Unlike Stefanik, her hubby didn’t have a connection in politics. He does a normal job in marketing and communications. Elise shared the wedding vows with her husband Matthew on August 19, 2017. The couple shifted their place to Schuylerville in December 2018.

As of 2022, Elise Stefanik’s personal wealth is estimated to be roughly $1.5 million. She has gathered a hefty amount all from her political career. Her annual salary as a U. S. House of Representatives would be around $174,000.