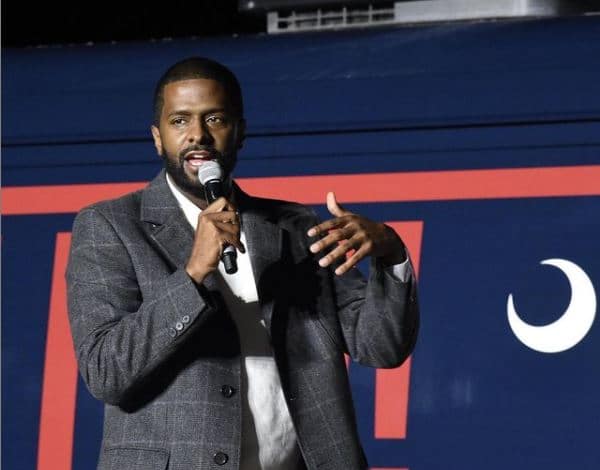 Bakari Sellers is a renowned American attorney and politician. He is well known for serving as the South Carolina House of Representatives for 90th District from 2006 to 2014. Bakari was in fact the youngest African American to get elected for the official post. He is currently working on CNN as a political analyst. As of 2022, Bakari Sellers net worth is estimated to be in the range of $1 to $5 million.

Bakari Sellers was born on the 18th of September, 1984 in the United States of America. He was born to parents, Cleveland and Gwendolyn Sellers. His father, Cleveland was a civil rights activist and a professor. He spends his childhood days growing up in Bamberg County, South Carolina.

Regarding his education, he has studied at Orangeburg-Wilkinson High School based in Orangeburg, South Carolina. He held a Bachelor’s degree from Morehouse College in 2005 majoring in African-American Studies. Later, he received a Juris Doctor degree from the University of South Carolina School of Law in 2008.

Bakari started working at Columbia-based law firm, Strom Law Firm in 2007. While studying at Morehouse College, he was a student body president. That made him attend his first annual lobbying group conference for AIPAC. Since then, he has been a popular African-American Zionist.

You May Also Like:   Top 20 Richest Lawyers Ranked by Their Net Worth 2022

Earlier, he had to face several criticisms from pro-Palestinian activists and Black Lives Matter for opposing to use of the word occupation. Bakari also fell into trouble when he tweeted an incident between teen Nicholas Sandmann and activist, Nathan Phillips.

He actually supported the Native American activist, Nathan claiming teen’s behavior as unacceptable and he can also be punched in the face. However, later he deleted his tweet claiming his comment on teen was metaphoric. After some time, he was taken in a lawsuit by the teen’s parents against the network, CNN, where Sellers served as an analyst.

At the young age of 22, he was elected as South Carolina House of Representatives for the 90th district. There he served for eight long years, until 2014. He later ran for Lieutenant Governor, but he was defeated by Henry McMaster. Bakari has also written an autobiography titled “My Vanishing Country”, representing the story of African-American working-class people who resides in the rural southern part of the United States.

Bakari Sellers is a tall man. He currently stands at a height of around 6 feet 3 inches or 190 cm tall and weighs around 90 kg or 198 pounds. His body stats like chest size, arms size, and waist size are not available at the moment. Meanwhile, his hair color and eye color are both black.

Sellers is married to a chiropractor, Ellen Rucker Carter. He shared the wedding vows with his wife Ellen in Summer 2015. His better half, Ellen is the co-owner of hair care products, Rucker Roots. Ellen was previously married to a professional basketball player, Vince Carter, with whom she had a daughter named, Kai Michelle.

Bakari Sellers’s exact fortune has not got revealed yet. But, according to our estimate, his net worth falls in the range of $1 to $5 million. Likewise, his salary as a political analyst on CNN has not got uncovered yet.

Elise Stefanik Net Worth: How Rich is the US Representative Actually?