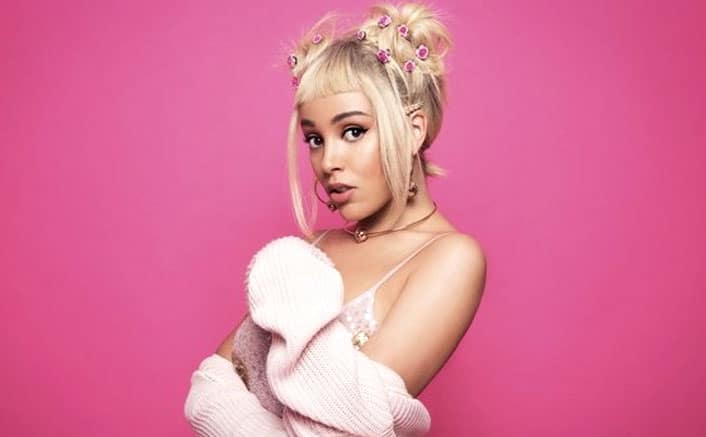 LikAmalaratna Zandile Dlamini known by her stage name as Doja Cat is an American singer, rapper, and songwriter. As of 2022, Doja Cat net worth is estimated to be $6 million.

Dlamini was born on October 21, 1995, in Los Angeles, California. Her mother Deborah Elizabeth Sawyer is a painter while her absent father Dumisani Dlamini is an actor, composer, and film producer from South Africa.

After her birth, she moved to New York, where she lived for five years. She then returned to Oak Park, California. Growing up, she took dance and piano lessons and listened lots of music. Her musical inspirations are Erykah Badu, Rihanna, D’Angelo, and Drake. She went to school but dropped out at the age of 16 while in junior year to focus on her music.

Like many rappers these days, Doja Cat started her music online. She spent time downloading beats from YouTube to create her own music. She used to upload songs onto SoundCloud frequently. One of her earliest tracks that got viral in SoundCloud is “So High”. The track has over 4 million spins.

In 2014, she signed to RCA Records label Kemosabe Records when she was just 17 years old. Later that years under the label MAU Records, she released her debut EP titled ‘Purr!’. She also continued to release new music on SoundCloud and started collaborating with other artists like Skoolie Escobar, Pregnant Boy, and frumhere.

In 2018, one of her songs “Roll With Us” entered Spotify’s Global Viral 50 chart. Two months later, she released her debut studio album “Amala”. The song “Juicy” from the album was a massive hit and the song debuted at 83 and peaked at 41 on the Billboard Hot 100.

Her second album “Hot Pink” was released on October 26, 2019, and it was also a huge success. The album peaked at number 9 on the Billboard 200. Some of the songs from albums like Candy, Boss Bitch, Say So were a huge hit and managed to enter the charts in countries like Canada, United States, France, Japan, and the United Kingdom.

Doja Cat’s recent release of a remix of “Say So” featuring Nicki Minaj topped the Billboard Hot 100, becoming the first number-one single for both artists. She has received huge praise from several artists. Ariana Grande said in an interview that she is planning to release a song with Doja Cat.

In early 2021, she collaborated with rapper Saweetie on the song “Best Friend”. She also worked with Megan Thee Stallion on the remix of “34+5” by Ariana Grande. 2021 was a good year for her as she was placed on Time Magazine’s “Time’s 100 Next” list. Prior to that Rolling stone ranked her at number #1 on their list of ten biggest breakthrough artists of 2020.

You May Also Like:   Cassidy Net Worth: How Rich is the Rapper Actually in 2022?

At the current age of 26, Doja Cat currently stands at a height of 5 feet 3 inches or 160 cm tall and weighs around 55 kg or 121 pounds. Her body measurements are 35-26-36 inches. Her natural hair color is dark brown but she frequently dyes pink, white, and red depending on her. Likewise, her shoe size and dress size are 7 (US) and 6 (US) respectively.

As of 2022, Doja Cat’s personal wealth is estimated to be around $6 million. Her income source is mainly from album sales and YouTube videos where she has over 5.6 million subscribers. Her net worth will definitely grow over time as her future looks in good shape.

Lil Tjay Net Worth: How Rich is the Rapper Actually in 2022?

Trinidad James Net Worth: How Rich is the Rapper Actually?