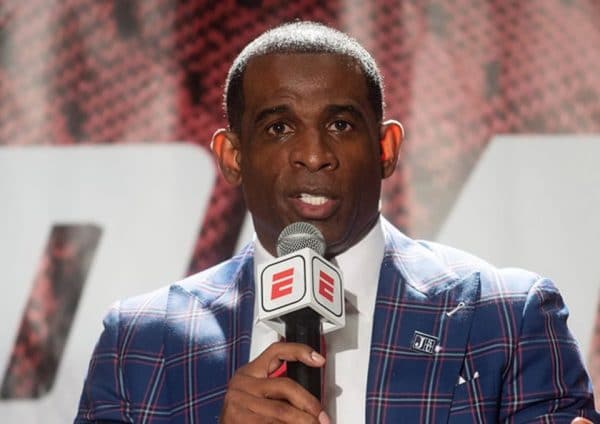 Deion Luwynn Sanders Sr., simply known as Deion Sanders is a former American football player. He is the current head football coach at Jackson State University. Sanders has played for 14 seasons in the National Football League (NFL). As of 2022, Deion Sanders net worth is estimated to be around $45 million.

Deion Sanders was born on the 9th of August, 1967 in Fort Myers, Florida, United States. He was passionate about sports since he was a kid. Sanders followed his sports dream while attending North Fort Myers High School, where he was a letterman. Later, he became an All-State honoree in football, baseball, and basketball.

Sanders was about to kick off his baseball career by signing with The Kansas City Royals. He was selected by the Royals in the 1985 Major League Baseball draft. However, in the end, he prefers to not sign a contract with the Royals. Then, he joined Florida State University, where he actively played football, baseball, and track.

Sanders started his professional baseball career in 1988 when he was picked up by the New York Yankees in the 1988 Major League Baseball draft. He played with the Yankees until the 1990 season. Sanders played with a batting average of .158 and made three home runs in total 57 games. Then, he was signed by the Atlanta Braves for the 1991 MLB season.

Deion has also been a brilliant football player. He was picked up by the Atlanta Falcons in the 1989 NFL Draft. Sanders was signed by the San Francisco 49ers for the 1994 season. He had the best season with the 49ers where he recorded six interceptions, 303 yards, and made 3 touchdowns.

Sanders was about to get retire from his football career in 2004, but he eventually signed a one-year contract deal with the Baltimore Ravens. He scored his 9th career interception return touchdown against the Buffalo Bills. He appeared in a total of 16 games with Baltimore, but he failed to qualify for the postseason. In January 2006, he officially retired from his professional career.

Sanders is currently working as a head coach at Jackson State University. He has made a good record as a head coach for Jackson. Deion’s team recently went one on one against the Florida A&M Rattlers on September 5, 2021. In the game, Jackson registered the victory against the Rattlers with the final score of 7-6.

Deion Sanders has been married twice. First, he got married to Carolyn Chambers in 1989. He has two children from his first marriage. In 1999, he exchanged the wedding vows with Pilar Biggers. From his second marriage, he has three kids. Sanders was awarded a $2.2 million judgment by the court on a divorce case with his second wife, Pilar. He was also handed over primary custody of three kids by the court.

As of 2022, Deion Sanders’ personal wealth is estimated to be around $45 million. He has gathered a huge amount mostly from his sports career. Other than his dedication to the sports field, he had a brief career as a rapper. He has also released an album titled “Prime Time” in 1994.

Tony Finau Net Worth: How Rich is the Golfer Actually in 2022?