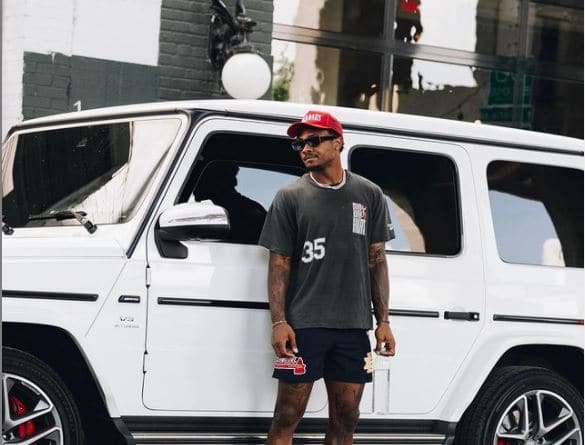 Stefon Diggs is a 28 years old American football wide receiver. He is best known for playing in the National Football League (NFL) for the Buffalo Bills. Diggs was selected in the 2015 NFL Draft by the Minnesota Vikings. In 2020, he led all NFL receivers with 1535 receiving yards and 127 receptions. As of 2022, Stefon Diggs net worth is estimated to be around $14 million.

Stefon Diggs was born on the 29th of November, 1993 in Alexandria, Virginia, United States. He lost his father, Aron Diggs in January 2008 after he went through congestive heart failure. Diggs took over the responsibility of his family as a father figure. He was just 14 at that time where he had to look after his two younger brothers, and at the same time, he had to continue his study.

Regarding his education detail, he has studied at the Our Lady of Good Counsel High School. He used to actively play football while attending high school. As a junior player, he made a record with 23 touchdowns and 810 receiving yards. He continued his good form as a senior where he recorded 8 touchdowns and 770 receiving yards.

Diggs was also excellent in track & field, where he used to compete as a sprinter. He finished at 7th place in the 100-meter dash in the 2011 Bill Carver T&F Classic. Diggs recorded a personal best time of 22.30 seconds as a senior player in the 200-meter dash while competing at the Darius Ray Invitational.

You May Also Like:   Sterling Shepard Net Worth: How Rich is the NFL Player Actually?

Stefon later attended the University of Maryland after receiving an athletic scholarship. He played for the Maryland Terrapins football for two years from 2012 to 2014. Diggs was in brilliant form as a freshman where he recorded 1896 all-purpose receiving yards. It was the second most record made in a single season in school history.

Stefon started his professional career in 2015 after he was picked up by the Minnesota Vikings in the 2015 NFL Draft. He was signed for four years by the Vikings, and he made his debut with Vikings in Week 4 against the Denver Broncos. In his first professional game, he made a team-high 87 yards. He was made a starting wide receiver of Vikings after he recorded 129 yards against the Kansas City Chiefs.

Diggs was traded to Buffalo Bulls on March 20, 2020. He played his debut game for the Bulls on September 13, 2020, against the New York Jets. In the match, he caught 8 passes and made 86 yards that helped the Bulls to get the victory with a score of 27-17. He earned the AFC Offensive Player of the Week Award after catching 9 catches for 14 yards against the New England Patriots on Monday Night Football.

Stefon has recently been selected as one of the eight team captains for the Buffalo Bulls. He was chosen as one of the captains after he was seen consistently praising his teammates behind the bar in practice.

Stefon Diggs’ present relationship status is assumed to be single. He was in a relationship with a lady named Tyler Marie, with whom he has a daughter named Nova. However, he has not shared further details on his love affair with his former girlfriend, Tyler.

In 2020, he was rumored to be dating actress, Tae Heckard. As per the reports, they were dating for two years before 2020, and Tae moved to Buffalo to stay with him. Tae was previously in a relationship with former NBA player, Brandon Jennings.

Nick Saban Net Worth: How Rich is the Legendary Football Coach?