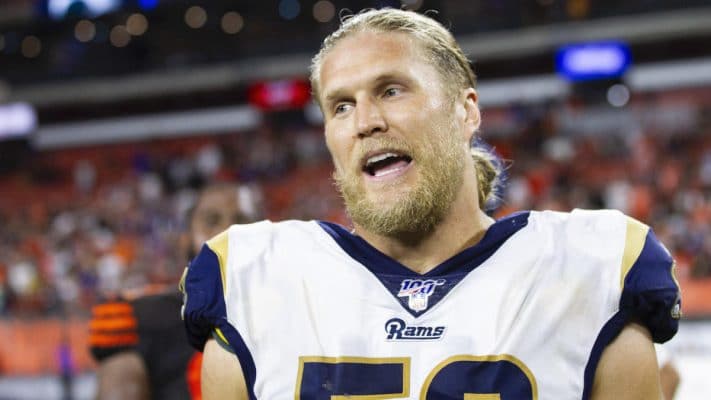 Clay Mattews is a 36 years old American football outside linebacker. He is best known for playing in the National Football League (NFL) with the Green Bay Packers and Los Angeles Rams. Clay was picked by the Green Bay Packers in the 1st round of the 2009 NFL Draft. As of 2022, Clay Matthews net worth is estimated to be roughly $50 million.

Clay has studied at Agoura High School and was a part of the Agoura Chargers pre-K team. His father, who was working as a team’s defensive coordinator didn’t take his son in the team because, at that time, he was physically undersized. Matthews later grew massively in the senior season, and he was started getting noticed by the local community colleges.

Matthews attended the University of Southern California and played for the University’s football team, Trojans for four years. He entered the University as a walk-on student-athlete. Matthews played mainly on special teams and continued being a reserve linebacker during the 2006 and 2007 seasons. He worked on his physical growth during the season, and in the 2008 season, he was placed in a hybrid elephant position.

You May Also Like:   Adam Vinatieri Net Worth: How Rich is the Retired NFL Player?

Clay continued to show amazing performance in the special teams’ play, and thus, he received USC’s Co-Special Teams Player of the Year Award in 2008. He was considered as one of the top prospects for the 2009 NFL Draft, and he eventually got picked up by the Green Bay Packers. In his rookie season with the Packers, he made a record of 51 tackles, 7 pass deflections, and 10 sacks. Matthews continued his good form in the 2010 season and made a record of most sacks in a single postseason for Packers.

Clay played along with the Packers till the 2018 season, and after that, he became an unrestricted free agent. He signed a 2-year contract deal with the Los Angeles Rams on March 19, 2019. With Rams, he played his first game against the Carolina Panthers in Week 1. In the game, he made 3 tackles, which helped his team to get the victory with 30-27. In Week 5, he suffered from a broken jaw due to which he had to undergo surgery. He was released by the Rams on March 19, 2020.

Clay Matthews is married to Casey Noble. He was first spotted with Casey at a hockey game in 2013. Though, the pair didn’t confirm their love affair. Their relationship was made officially public after they shared the wedding vows in July 2015. He shared two kids with his wife Casey; Madeline Joy, and William Clay Matthews IV.

As of 2022, Clay Matthews has an estimated net worth of around $50 million. He has gathered the vast chunk of money from his involvement as an outside linebacker for Green Bay Packers, and Los Angeles Rams. As of now, Clay Matthews has earned total earnings of $83,505,252 from appearing in 12 seasons from 2009 to 2020.

You May Also Like:   Anthony Johnson Net Worth: How Rich was MMA Fighter Actually?

Clay has recently listed his newly completed French Provincial estate which is located in Los Angeles for a whopping $29.995 million. He has purchased the property back in 2013 for $2.6 million.

Ime Udoka Net Worth: How Rich is the Former NBA Player?