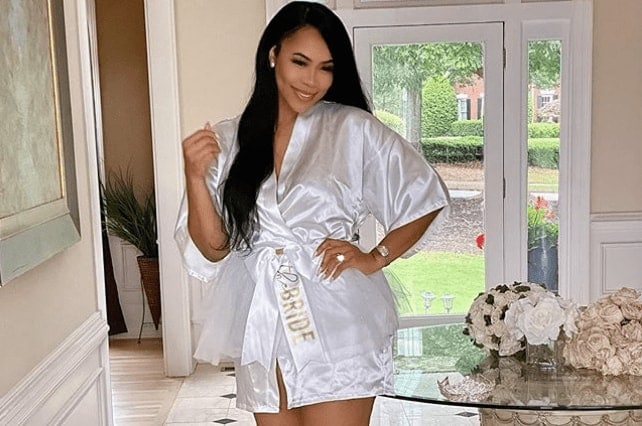 Chandra Davis also known as Deelishis is an American model, reality TV personality, and actress. She is best recognized for her appearance on VH1’s reality series “Flavor of Love 2”. She won the reality show over Tiffany’s New York’ Pollard. As of 2022, Chandra Davis net worth is estimated to be roughly $500 thousand.

Deelishis was born on January 2, 1978, in Detroit, Michigan, United States. Her real name is Chandra London Davis. She is even known as London Charles. Regarding her education detail, she has studied at Alabama State University.

She became a renowned television figure after she appeared in the 2nd season of the popular reality show “Flavor of Love”. Deelishis was 28 years of age by that time. She was declared as the winner of the reality series at the end, defeating Tiffany Pollard. Deelishis broke up with Flav, after the end of the show. She announced her break up with Flav through the VH1 special “Where Are They Now: Reality Stars”.

Deelishis is known for being an eye captivating model. In fact, she has modeled for Eye Candy Model Agency. She has even appeared in few music videos like Paul Wall’s Break Em Off and BET’s Rip the Runaway. In April 2007, she made an appearance on the magazine cover of Smooth Magazine. The same year, she was featured on Black Men Magazine’s cover.

You May Also Like:   Jaime Xie Net Worth: How Rich is Bling Empire's Jaime Xie?

She was featured as a lollipop girl in Lil Wayne’s music video “Lollipop”. Deelishis has also appeared on 3rd season of the reality show “I Love Money”. However, she was disqualified from the show for physically assaulting one of the cast members in 4th episode. She finished at 14th place on the reality series.

Besides working on several reality shows, she has also tried to establish herself as a singer. She released her first song titled “Rumpshaker” in 2007. Her next song “The Movement” was released in 2009. The song was a response to the 2008 election of US President, Barack Obama. She released another song titled “Set It Off” in 2009.

Deelishis aka Chanda Davis is married to Raymond Santana, one of the 5th infamous rape victims of Central Park Five. The pair started dating in October 2019. After dating for two months, she got engaged to him in December 2019. They finally turned into a married couple after sharing wedding vows on June 7, 2020.

Deelishis was previously married to Orlando Gordon. She tied the knot with him in 2008. With him, she has a daughter named Lexington Brielle Gordon, who was born on April 8, 2010. She separated from Orlando in 2014. Deelishis also had a daughter named Jasmine from her former boyfriend, whose name is not known.

Chandra Davis has earned a lump sum fortune of around $500 thousand by 2022. The majority of his income came from her appearance on several reality series and modeling assignments. Besides that, she has also worked on few movies like “Pawn Shop”, “Queen of Media” and “Kony Montana”.

Steve Doocy Net Worth: How Rich is the Host of Fox & Friends?