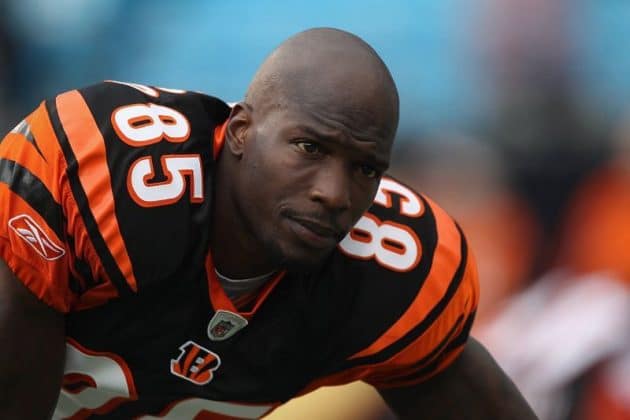 Chad Ochocinco is a 44 years old retired American football wide receiver. He is best known for playing in the National Football League (NFL) for the professional football teams, the Cincinnati Bengals, the Miami Dolphins, and the New England Patriots. Chad was selected by the Cincinnati Bengals in the 2001 NFL Draft. As of 2022, Chad Ochocinco net worth is estimated to be around $15 million.

Chad Ochocinco Johnson was born Chad Javon Johnson on the 9th of January, 1978 in Miami, Florida, United States. He was born to his parents, Sam Brown and Paula Johnson. Chad lost his father on January 7, 2012. He grew up with two sisters named Syleena Johnson and Chinita.

Regarding her education detail, he has studied at the Miami Beach Senior High School. He completed her high school graduation in 1997 and joined Langston University. However, he was later transferred to a community college, Santa Monica College in California. While studying at Santa Monica, he played football with future NFL wide receiver, Steve Smith. Chad was later transferred to Oregon State University after being recruited to play for the OSU team.

Chad’s professional career began after he was drafted by the Cincinnati Bengals in the second round of the 2001 NFL Draft. While playing for the Bengals in 2003, he made a record for the Bengals franchise by recording 1355 receiving yards. Soon after a year, he surpassed his own franchise record by recording 1432 yards. Chad extended his contract with Bengals through 2011 on April 20, 2006.

You May Also Like:   Jermaine O’Neal Net Worth: How Rich is the Retired NBA Player?

Ochocinco played for the Bengals till the 2010 season. In his last season with Bengals, Chad tied the Bengals franchise record for most touchdown catches, and he eventually became the 6th player in NFL history to record 10,000 receiving yards with one team. He was traded to the New England Patriots on July 28, 2011. Though he went on to have the least productive season of his career with the Patriots, and he was released by the team on June 7, 2012.

Chad was signed with the Miami Dolphins on 11th June 2012. He was with the Dolphins for two months as he was released on August 12 after he was arrested on the previous night. On April 17, 2014, he signed a 2 year contract deal with the Montreal Alouettes. Chad made an appearance in five regular-season games for Alouettes during the 2014 CFL season due to nagging injuries. On February 9, 2016, he became a free agent after not getting an offer of a new contract.

Johnson worked as a guest instructor for the Cleveland Browns after his post-playing career. In March 2010, he appeared as one of the contestants on the dance reality show “Dancing with the Stars” in the 10th season. Chad appeared as a guest host on WWE Raw on 13th September 2010. In 2018, he returned to soccer after being signed for the National Premier Soccer League. On October 20, 2018, he netted a penalty against FC Boca Predators, which was also his first goal for the club.

Ochocinco was recently named Bengals’ Ruler of the Jungle for the Week 9 game between the Bengals and Browns on Sunday, November 7, 2021. He will be in attendance during the game sitting on a jungle-themed throne. Chad will also be leading the crowd in the Who Dey chant before the kickoff of the game.

Chad Ochocinco was married to Basketball Wives star, Evelyn Lozada. He exchanged the wedding vows with Evelyn on July 4, 2012. However, after a month, on August 11, 2012, he was arrested on a charge of domestic battery. He was released soon the following afternoon on a $2,500 bond.

Chad and Lozada finalized their divorce on September 29, 2012. He was also accused of robbery domestic violence by his former girlfriend, Annalise Mishler in March 2020.

As of 2022, Chad Ochocinco’s personal wealth is estimated to be around $15 million. He has amassed total career earnings of $48,866,500 from his professional football career. Chad was signed for a whopping $6.5 million by the New England Patriots on July 28, 2011.

JB Holmes Net Worth 2022: How Rich is the Golfer Actually?

Jake Burton Carpenter Net Worth: How Rich was the Snowboarder?