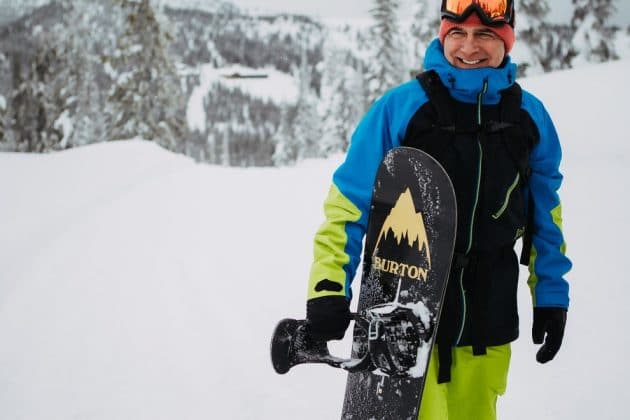 Jake Burton Carpenter, who is also known as the godfather of snowboard was an American snowboarder. He founded the snowboard manufacturing company, Burton Snowboards in 1977. Jake was one of the inventors who invented the modern-day snowboard. Jake Burton Carpenter net worth at the time of his death is estimated to be around $300 million.

Jake Burton Carpenter was born on the 29th of April, 1954 in Manhattan, New York City, United States. He lost his mother, Katherine in 1971 who died of Leukemia. Jake had a brother, Corporal George Carpenter, who died while serving in Vietnam on February 17, 1967. He grew up living with his father and two sisters.

Regarding his education detail, he has studied at the Brooks School North Andover. Later, he attended The Marvelwood School. Following graduation from the school, he joined the University of Colorado at Boulder. He was about to join the University’s ski team, however, he couldn’t join the team after he had an automobile accident.

Then, he stayed several years away from college before he resumed his study again by joining the New York University, where he received a degree in economics.

After completing University graduation, he started working for a small investment banking firm. He had to work in the banking firm for 12 hours workdays, due to which he ultimately decided to quit his job. Then, he began working on inventing a basic toy snowboard that is controlled by a rope.

In his initial days, Jake had to struggle a lot to sell his snowboards. In one of his old interviews, he shared that while traveling to New York State to sell his 38 snowboards to local dealers, he instead came back with 40 snowboards. The two snowboards were returned back by the buyer who gave him two back of the snowboard that he had purchased. Jake later in the 1970s became associated with a small cadre of manufacturers who started selling snowboards with special design features.

In the year 1979, he participated in the National Surfing Contest in Michigan, where he got the victory in the Open Division and received a $300 prize amount. Since the 1980s, he has been one of the world’s largest snowboarding equipment manufacturers. He is even credited for developing the economic ecosystem which considers Snowboarding as a sport, lifestyle, and culture.

Recently, the HBO and Red Bull Media House made a documentary titled “Dear Rider” based on Jack’s life and the history of snowboarding. The document started premiering on HBO  and HBO Max on Tuesday, November 9, 2021, at 9-10:30 p. m. ET/PT. The documentary features the story of over four decades of snowboarding, and the history of Jake founding the company, Burton Snowboards in 1977.

You May Also Like:   Brock Davies Net Worth & Wiki: How Rich is Scheana Shay's Boyfriend?

Jake Burton Carpenter was married to Donna Gaston. He met Donna first time at a 1982 New Year’s Eve party. They exchanged their wedding vows in 1983. Two years later, the pair moved to Austria where they created a European base. The couple had three sons together, George, Taylor Gaston, and Timi Eaton Burton Carpenter. He died on November 20, 2019, due to a re-occurrence of cancer.

Jake Burton Carpenter had a net worth of a massive $300 million before he passed away on November 20, 2019. Jake’s company, Burton Snowboards not only dominated the snowboards but also a lifestyle of activewear and other accessories. At present, the company has nearly 600 employees and earns hundreds of millions of revenue in a year.

Deron Williams Net Worth: How Rich is the Retired NBA Player Actually?