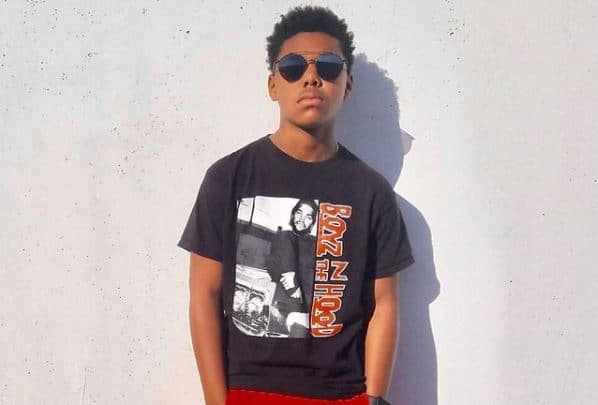 Cedric Joe is an American teen actor who is best known for featuring in the film called Space Jam: A New Legacy where he plays the son of basketball legend LeBron James. As of 2022, Cedric Joe has an estimated net worth of $100,000.

Cedric was born on March 17, 2005, in California, USA. He was first employed when he was only five months old as he was a child model to being a part of commercials. This was possible after he won the Baby Gap contest. He has mentioned that the first-ever commercial he did was when he was only 3 years old.

Cedric has continued to practice theater by being part of the Black Super Hero Magic Mama Production. Along with his acting engagements, Cedric is continuing his high school education.

Cedric Joe Net Worth and Career

Being part of this industry from such a young age, Cedric has already realized the kind of sacrifices that are needed to succeed. Furthermore, he has mentioned how he is very grateful to have supportive parents who have helped him to pursue his passion for acting.

Among his notable roles is being involved in the episode of Wedding Shower of Doom in 2017. He has been involved with roles in Modern Family and Loving Him in the past. Cedric has also been actively involved in different plays and had just completed a play at Geffen Playhouse when he found out that he had gotten the role for Space Jam: A New Legacy which is a sequel of Space Jam which was released close to 25 years ago and featured Michael Jordan as the lead star.

You May Also Like:   Harley Rodriguez Wiki & Net Worth: Know About Jonathan Knight's Partner

He has mentioned that working as a lead actor for Space Jam: A New Legacy has been a dream come true for him as Cedric always believed that if he kept on working towards the bigger picture of being in the industry, he would get better and better roles. Space Jam has already been a blockbuster hit in the U.S. with there being stars such as LeBron James who plays Cedric’s dad in the film. The story of the film overall revolves around the father and son relationship between the two.

Cedric plays the character Dom James who has seen his father’s success in basketball growing up. However, he is not interested in following in his father’s footsteps as a basketball player but rather wants to be a video game developer as that is what he is passionate about. But, LeBron does not seem to understand his son’s desires and this miscommunication is a key part of the film. With Space Jam: A New Legacy already being such a big hit, Cedric says that he would love to play the character of Miles Morales in the Marvel Cinematic Universe in the future.

At the current age of 17, Cedric Joe stands at a height of 5 feet 0 inches or 1.55 m tall and weighs around 60 kg or 132 pounds. His body stats like chest size, arms size, and waist size are unavailable at the moment. Likewise, his hair color and eye color are both black.

You May Also Like:   Jackie Mason Net Worth: How Rich was the Comedian Actually?

As of 2022, Cedric Joe has an estimated net worth of $100,000. He earned that money by appearing in several movies and doing some modeling gigs.

Anthony Ramos Net Worth: How Rich is the Actor Actually in 2022?