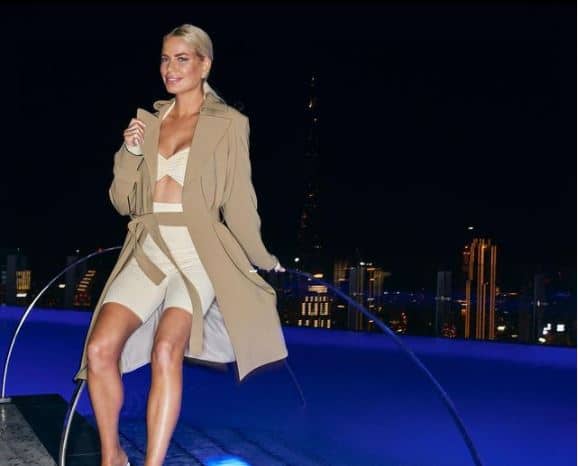 Caroline Stanbury is a 46 years old British businesswoman, reality TV star, and fashion enthusiast. She is best known for appearing as one of the main cast members on the Bravo TV series “Ladies of London”. She is also known for dating Prince Andrew. As of 2022, Caroline Stanbury net worth is estimated to be around $35 million.

Caroline Stanbury was born on the 28th of April, 1976 in London, England. She was born to her parents, Anthony and Elizabeth Stanbury. Her dad, Anthony is a venture capitalist who worked as a managing director of the high-end fashion group, Jaeger. Likewise, her mom, Elizabeth used to run a cashmere knitwear business.

Caroline has three siblings named Alexander George Basil, Victoria Elizabeth Sophie, and Edward Samuel Joseph Stanbury. For her study, she attended the acclaimed Westonbirt School based in Gloucestershire. She developed an interest in fashion and style from an early age.

Stanbury started off her career as a top personal stylist. After a short span of time, she expanded her contacts all around the world from small-scale artisans to fashion and interior designers. As she excelled in the fashion world, she went on to her own business, Gift Library in 2008.

Caroline previously worked as a public relations professional for London’s most elite group. During that time, she was able to gain a good reputation around the most elite group of London. In 2013, she expanded her ventures in the wedding industry by acquiring an independent wedding list service of U. K, “The Wedding Shop”.

Caroline came into notice after she appeared as one of the cast members on Bravo TV’s reality series “Ladies of London”. The reality series started airing in June of 2014, which followed the lifestyles of seven high-profile women residing in London. She along with other six women resumed their normal life without the camera after the series stopped airing in 2017.

Caroline is reportedly coming back into the reality TV world again. As per the reports, she is one of the cast members who would appear in the “Real Housewives of Dubai”. The Executive producer of the Real Housewives, Andy Cohen made an announcement of the new version of the reality series in Dubai during an appearance on the NBC show “Today”.

The Real Housewives of Dubai is scheduled to premiere on Bravo TV next year. It will mark Dubai as the 11th City in the franchise. However, the cast members have not yet been finalized but there is strong speculation going around that Caroline is a part of the series. She was moving to Dubai during her series finale in Ladies of London, and reportedly she also has a home in Dubai.

Caroline Stanbury has dated many known celebrities and high-class royalty. She has been in a relationship with English actor, Hugh Grant, and has also dated Prince Andrew at some point. Caroline was married to a financier, Ceb Habib in 2004.

The pair shares three kids together, Yasmine, Zac, and Aaron Habib. Caroline and Caleb started having differences after 17 years of their marriage, and then they took a decision to end their relation with divorce, which was finalized in December 2019.

Caroline is currently engaged to former Read Madrid Player, Sergio Carrallo. Sergio put a proposal to Caroline 5400 meters above the holy lakes of Nepal. Caroline also shared the happy moment on her Instagram where she captioned the post “So I have been wanting to share this moment with you all! 5400 meters up on the holy lakes I said YES!”.

As of 2022, Caroline Stanbury’s personal wealth is estimated to be around $35 million. She must have bagged the colossal amount from running her own luxury goods company, Gift Library. The luxury goods company has become a favorite brand among known celebrities and socialites.

Pete Davidson Net Worth: How Rich is the SNL Comedian Actually?

Carley Shimkus Net Worth: How Rich is the Fox News Anchor Actually?