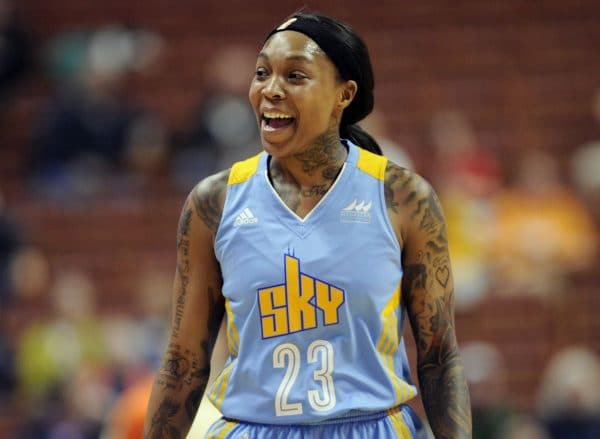 Cappie Marie Pondexter is an American former professional basketball player. During her playing days, Cappie made a name for herself for her quick crossovers. She was even voted by fans to be among the Top 15 players in the Women’s National Basketball Association (WNBA) in 2011. As of 2022, Cappie Pondexter net worth is estimated to be around $1 million.

Pondexter studied at John Marshall Metropolitan High School where she was active as a basketball player. She went on to be named as a WBCA All-American because of her performances there. She was also a participant called to play in the 2001 WBCA High School All-America Game where she won the MVP honors as well.

After high school, Pondexter joined Rutgers University where she played for the Scarlet Knights. There, she won the Big East Championships in 2005 and 2006. She also got to compete in the NCAA Tournaments during her time at Rutgers ending up being the winner of the 2006 Women’s Basketball News Service National Player of the year.

Cappie Pondexter Net Worth and Career

In the 2006 WNBA Draft, Pondexter was selected 2nd overall by the Phoenix Mercury and in her debut season would be named in the western conference WNBA all-star team. The very next year, she would be an integral player for the Phoenix Mercury in leading them to the championship and was even named the 2007 WNBA Finals Most Valuable Player. It was clear Pondexter was one of the top players in the WNBA which she proved even more over the years.

In 2009, they would again win the championship which was Pondexter’s second in three years. Then in 2010, upon her request to be traded, Pondexter started to play for the New York Liberty team with her being voted by fans as among the Top 15 players in the fifteen-year history of the WNBA. This was a huge achievement in her career which signified that she was among the best in her generation.

After several years at the New York Liberty, Pondexter would be traded to the Chicago Sky in 2016 and would play for 2 years. After her stint there, she then played for the Los Angeles Sparks and later on for Indiana Fever. In 2019, Pondexter announced her retirement from the WNBA after playing for a total of 13 seasons.

Cappie Pondexter stands at a height of 5 feet 9 inches or 1.75 m tall and weighs around 65 kg or 143 pounds. Her body measurements are not available at the moment. Likewise, her eye color and hair color are both dark brown.

Cappie Pondexter has not revealed many details about her relationship’s status since she is very private regarding it. She has been part of several controversies in the past having been criticized for her comments after the 2011 Tōhoku earthquake and tsunami in Japan. Cappie has also been arrested for suspicion of battery in the past. She also raised eyebrows among people after she blamed LeBron James for having her traffiked. However, most people believe this is simply false.

You May Also Like:   Sunisa Lee Net Worth: How Rich is the Gymnast Actually in 2022?

As of 2022, Cappie Pondexter has an estimated net worth of $1 million. She must have earned a majority of that money during her time at the WNBA.

Yermin Mercedes Net Worth: How Rich is the Baseball Player Actually?