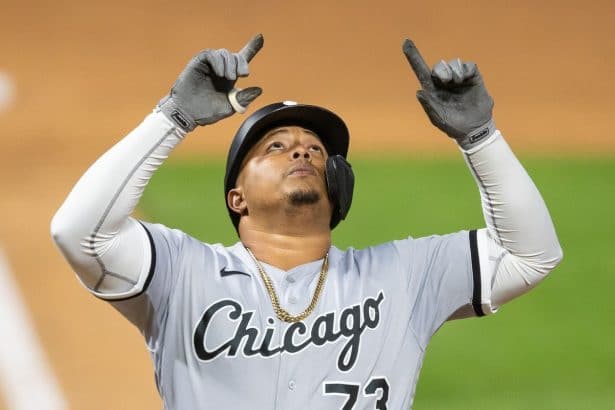 Yermin Mercedes is a Dominican professional baseball catcher who plays for the Chicago White Sox in the Major League Baseball(MLB). He is the record holder in the league for being the first baseball player to begin a season with eight consecutive hits. As of 2022, Yermin Mercedes net worth is estimated to be around $800,000.

Yermin was born on February 14, 1993, in La Romana, Dominican Republic. Nothing more is known about his personal life including his parents, education details, and child life.

Yermin Mercedes Net Worth and Career

Mercedes started his career by playing as a catcher for the Washington Nationals having signed a contract with them as an international free agent in 2011. He would spend three seasons with the DSL Nationals before being released from the organization in 2013. In 2014, Mercedes started to play for the Douglas Diablos and later for the White Sands Pupfish in the Pecos League. He also played for the San Angelo Colts of the United League Baseball.

Mercedes was still unsettled as he was playing as an independent baseball player for different teams. He had signed a minor league contract with the Baltimore Orioles in 2014. The very next year, he then played for the Delmarva Shorebirds where he had an impressive performance with 8 home runs. In the next seasons, he hit 20 home runs.

You May Also Like:   Sammy Watkins Net Worth: How Rich is Chiefs' Wide Receiver?

In 2017, Mercedes played for the Chicago White Sox while in 2018, he spent the season for the Winston Salem Dash where he managed to score 14 home runs. His play with different teams continued in 2019 as well as he played the season by splitting between the Birmingham Barons and the Charlotte Knights. On August 1, 2020, Mercedes seemed to have had a breakthrough as he was called to the major leagues of the Chicago White Sox.

He would record his first hit for the MLB in 2021 and was even named in the AL Player of the Week and later the Rookie of the Month for April. However, the manager Tony La Russa was not impressed by Mercedes for hitting a home run on a 3-0 count with an 11-run lead off a position player. This led to his demotion to the AAA Charlotte Knights on July 2, 2021.

Mercedes is married to a woman named Alejandra with the two tying the knot in 2020.

As of 2022, Yermín Mercedes has an estimated net worth of $800,000. He earned most of that money as a baseball catcher playing for the Chicago White Sox.

You May Also Like:   Davante Adams Net Worth: How Rich is Packers' Wide Receiver?