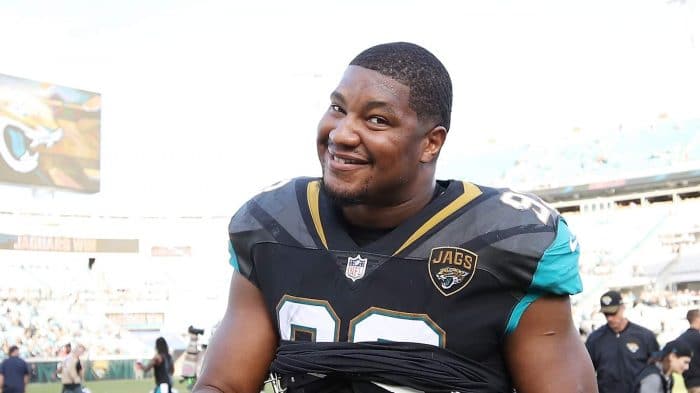 Calais Campbell is an American football player who plays as a defensive end for the Baltimore Ravens of the National Football League. As of 2022, Calais Campbell net worth is estimated to be $50 million.

Campbell was born on September 1, 1986, in Denver, Colorado to Charles and Nateal Campbell. He has two sisters, Kimba Blaylock and Keyonne Campbell, and five brothers: Jamar, Raj, Ciarre, Severin, and Jared in his family. His father Charles was a football player who played football at the University of Miami and Arizona Cardinals. Meanwhile, his brothers Ciarre and Raj also played college football at Colorado State and Butte Junior College respectively.

Campbell went to South High School in Denver, Colorado where he played football and basketball. In football, he recorded a state-record total of 57 sacks in his high school career. On the basketball side, he averaged 22.7 points, 16 rebounds, and 3.3 blocks per game.

In 2008, the Arizona Cardinals selected him in the second round of the NFL Draft. He signed a four-year, $3.4 million contract, with $1.68 million guaranteed and a signing bonus of $480,500. In his rookie season, he recorded 28 combined tackles, a pass defended a forced fumble and a fumble recovery.

His first career start in the Cardinals’ shirt came against the San Francisco 49ers in 2009. He recorded a season-high six solo tackles and deflected a pass in their 20-16 loss. He finished his second season with the Cardinals recording 45 combined tackles, 7 sacks, 5 passes defended, and a forced fumble in 16 games.

Campbell played with the Cardinals from 2008 to 2017 before moving to Jacksonville Jaguars. In 2017, she signed a four-year contract worth $60 million including $30 million guaranteed and a signing bonus of $6 million. He finished his first season with the Jaguars recording 67 combined tackles, a career-high 14.5 sacks, 3 passes deflections, 3 forced fumbles, and a fumble recovery in 16 games. He was ranked 14th on the NFL Top 100 Players of 2018.

Calais played with the Jaguars from 2017 to 2019. He was then traded to the Baltimore Ravens. Shortly after the trade, he signed a one-year contract extension.

Lanto Griffin Net Worth: How Rich is the Golfer Actually in 2022?